Apple in 2019 made the unprecedented move of canceling work on the AirPower, the wireless charging mat that was supposed to charge the Apple Watch, iPhone, and AirPods all at once.

There are already a number of AirPower-like alternative products on the market, and we're likely going to be seeing additional replacements in the future. None of these accessories do exactly what the AirPower promised because there are dedicated spots to charge each device, but each option will charge more than one device at one time. 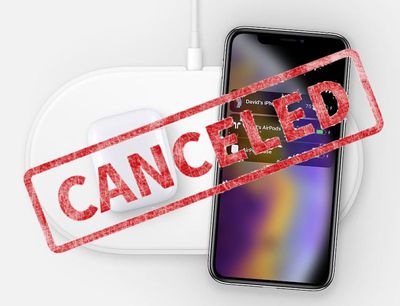 2. Belkin Boost Up Wireless Charging Dock ($127) - This is another expensive dock, but it's another that we reviewed and liked quite a lot. Belkin's Boost Up Wireless Charging Dock has an upright charging space for wirelessly charging an ‌iPhone‌ and a space for the Apple Watch, but this isn't a dock suitable for the AirPods. Still, it's a good option for dual device charging.

3. ZENS Dual + Watch Wireless Charger (99 euros) - The Dual + Watch Wireless Charger from European company ZENS is another option that we recently reviewed and were impressed with. It has a stand for charging an Apple Watch, along with a base that can wirelessly charge two iPhones at one time. It's 99 euros which is pricy, but ZENS does ship worldwide. This dock is temporarily out of stock, but it's coming back in May.

4. NytStnd AirPods Trio ($109) - The Nytstnd will charge your AirPods, Apple Watch, and ‌iPhone‌ all at once, but there's a catch - there's no wireless charging for AirPods. The Apple Watch charges via a standard Apple Watch charging puck (that you supply), while there's a wireless charging pad for ‌iPhone‌, a Lightning port for AirPods, and one extra Lighting port. On the plus side, you can charge all three items at once and there's also an extra spot for storing keys or other odds and ends. You also don't need the new AirPods 2 with Wireless Charging Case to use it.

5. Unravel Wireless Charger ($99) - This interesting little charger features three charging stations, one for AirPods, one for Apple Watch, and one for ‌iPhone‌. You can lay them flat or roll them up in a configuration that works for you if you only need to charge two devices at once. We haven't tried this, but it's a neat design and the reviews look to be largely positive.

6. Moshi Sette Q ($89) - Moshi's svelte-looking wireless charging pad houses dual coil modules for fast-charging an ‌iPhone‌ and a pair of AirPods (or another phone) at up to 15W each. Inside, a high-density ferrite sheet maximizes the amount of charging power directed towards the receiving device, allowing Sette Q to charge through phone cases up to 5mm thick. In addition, the mat features a 5W USB-A port on the front to charge an additional wired device. Moshi also sells a Flekto compact folding Apple Watch charger ($49), which pairs nicely with the spare wired port.

As of writing, the Sette Q comes with a USB-C outlet cable but the power adapter isn't included, so you'll need to make sure the one you use is powerful enough to feed all wireless devices at the maximum 15W charging speed. Moshi recommends a 45W USB-C Power Delivery 3 adapter, but any PD adapter over 45W will work.

Overall, this is a well-made, nice-looking piece of equipment offering a complete wireless charging solution for your Apple devices, although it is a tad expensive given that the Apple Watch charger is sold separately and the power adapter isn't included.

If you go to Amazon and type in "‌AirPower‌" or "Wireless Charging Station" you'll see a whole slew of cheap wireless chargers that promise to charge your Apple Watch, ‌iPhone‌, and AirPods all at once. We haven't tested any of these options and can't verify whether they work, and at these price points, there's no way they're using Apple-certified components.

Still, if you're looking for an alternative to the ‌AirPower‌ that's super affordable, these might be what you want. We'll list some of the options that are getting better ratings below.

The ‌iPhone‌ and the AirPods Wireless Charging Case will work with any Qi-based wireless charger on the market, so there are an endless number of single device wireless chargers you can get as well.

Have a favorite ‌AirPower‌ alternative that we didn't list here? Let us know in the comments.

Pepe4life
I think it’s highly irresponsible for MacRumors to recommend these products when nearly all of them lack proper safety certification such as UL listing.
Score: 35 Votes (Like | Disagree)

I think it’s highly irresponsible for MacRumors to recommend these products when nearly all of them lack proper safety certification such as UL listing.

Not to mention the reviews on Amazon for just about every alternative I’ve seen mentioned them coming broken or failing in a couple of weeks. One even mentioned a high pitched buzzing while charging. NO THANK YOU!
Score: 18 Votes (Like | Disagree)

nouveau_redneck
A charging mat is just another dongle. I prefer keeping is simple and would rather have only the cable without the charging dongle.

zorinlynx
One thing that bothers me is that Apple gave up rather than still try to come out with a great product.

They should have scrapped the idea of being able to put the devices anywhere on the pad and done something clever like use magnets to make the device align itself with a charge coil when you put it down.

The Palm Pre did this in 2009! You'd lay it down on the charger and the phone would center itself and charge. No trying to align anything.

DNichter
This is exactly why I never understood the hype around AirPower.
Score: 13 Votes (Like | Disagree)

Enclavean
Amazing, after so many articles, people posting here don’t know what Apple was trying to achieve with AirPower and think that these chargers do the same thing.

Someone even saying that the $39 above is the same thing, how mistaken can someone be.
Score: 12 Votes (Like | Disagree)
Read All Comments