Instead, Apple allows users to select "Allow While Using the App," "Allow Once," or "Don't Allow," which some app creators have taken offense to. The leaders of seven companies that make apps for iOS devices banded together to write an email to Apple CEO Tim Cook to speak out about the changes, with the details shared by The Information. 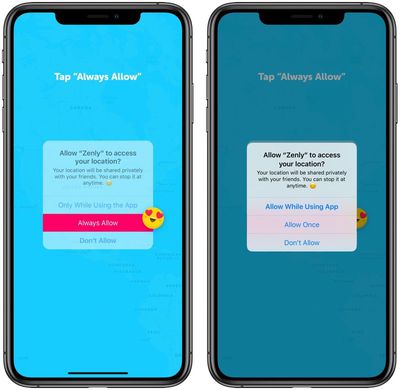 As an example, Zenly, a location tracking app owned by Snap, needs to have location tracking on permanently to function. Since there's no option to turn on "Always Allow," Zenly has to have a clunky secondary display screen that instructs users to open up the Privacy settings on their iPhones to change the location setting. This makes consumers more aware of apps that are tracking them continually, but it is an extra step that app developers must contend with.

Apps that want continual location data must instruct customers to enable it in the Settings app
According to the companies who wrote to Cook, the changes could potentially lead users to think their apps are broken unless they're "savvy enough" tweak Privacy settings. These are the companies whose leaders wrote to Cook about the privacy changes:

The app creators suggested Apple create a two-step process that would let users grant apps access to locations as a solution, but it's not clear if Apple has plans to implement changes.

The companies were also concerned about changes Apple is making to a VoIP feature designed to let apps run in the background to listen for calls, but that was being abused for other tracking purposes. Apple doesn't plan to let developers use Apple's PushKit API for anything beyond voice calls in iOS 13.

While the companies admit that apps used this feature for tracking user location and for gathering data, they claim the change will hurt important app features. As an example, Life360 reportedly uses the feature to access a user's location to dispatch emergency services when a customer is involved in a car accident.

The email ends by pointing out that Apple's own apps do not need to get user permission to access user location, such as for Find My, which is built into the iPhone as a way to keep track of iOS and macOS devices.

"Like you, we are committed to ensuring that privacy is a top priority, but are concerned that the current implementation will create user confusion that actually undermines this goal," the e-mail to Cook reads. "The changes also have the added effect of removing critical geolocation functionality while simultaneously not applying to Apple's own apps, some of which compete with the products we develop."

In response to questions about the email, an Apple spokesperson told The Information that Apple's goal is to make the App Store a safe, trusted source for apps and to give its users the best products and ecosystem in the world.

We take responsibility for ensuring that apps are held to a high standard for privacy, security and content because nothing is more important than maintaining the trust of our users. Users trust Apple--and that trust is critical to how we operate a fair, competitive store for developer app distribution. Any changes we make to hardware, software or system level apps is in service to the user, their privacy and providing them the best products and ecosystem in the world.

In addition, Apple said that it is working with some of the companies that signed the email to find alternative methods for features that are being obsoleted, such as background tracking for purposes other than voice calls.

Apple also says that while system apps like ‌Find My‌ don't need to make location tracking requests from users, some Apple apps distributed through the ‌App Store‌ will abide by Apple's processes for requesting user permission to access location information. The full report with additional details can be read over at The Information.

Preed08
Im sorry, but **** your surreptitious perpetual tracking via the always allow button. I applaud this change
Score: 232 Votes (Like | Disagree)

spazzcat
Being on a privacy kick lately, I am very happy with all the changes Apple is making. There are very very few apps I want tracking me 24/7.
Score: 138 Votes (Like | Disagree)

Akrapovic
This change is good for consumers. App developers have proven they cannot be trusted.

These apps probably have legit uses. But Apple didn’t ruin it for them. Abusive developers did. If everyone played nice then this wouldn’t have happened.

F them, and TWO THUMBS UP to Apple for this change!!!

If I wanna give an app this ability, such as for navigation apps, then I am capable going into Settings and doing it myself!
Score: 93 Votes (Like | Disagree)

jclo
I understand what app developers are getting at here, but honestly, users who aren't savvy enough to go into the Privacy settings and change the option to "Always Allow" when necessary are the exact people who probably shouldn't be continually tracked by an app.
Score: 61 Votes (Like | Disagree)
Read All Comments