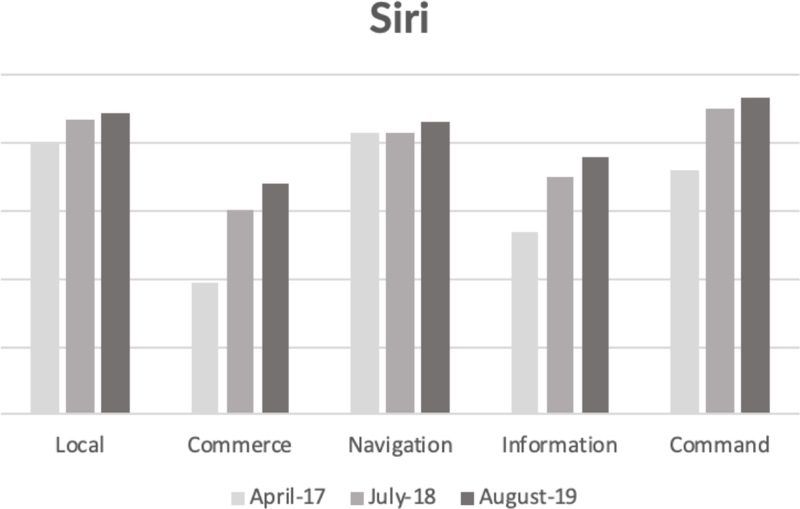 This test covered smartphones specifically, comparing iPhones and Android devices. Munster says that smartphones were isolated from smart speakers because while underlying technology is similar, "use cases vary." ‌Siri‌ was tested on an iPhone running iOS 12.4, Google Assistant on a Pixel XL, and Alexa in the iOS app.

Questions were based on five categories and all assistants were asked the same 800 questions. Each question set was designed to "comprehensively test a digital assistant's ability and utility." Some of the sample questions across each of the categories:

‌Siri‌ did best in the command, local, and navigation categories, faring less well in the information and commerce categories. ‌Siri‌ actually won out in the command category, but trailed behind Google Assistant in other categories. 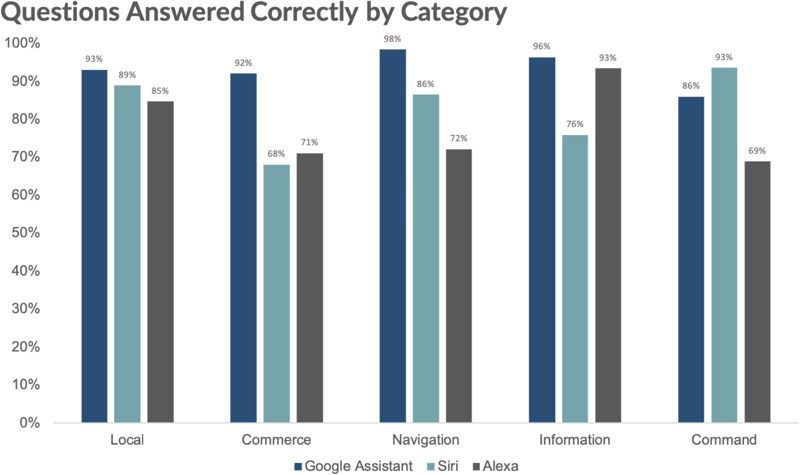 ‌Siri‌ continues to prove more useful with phone-related functions like calling, texting, emailing, calendar, and music. Both ‌Siri‌ and Google Assistant, which are baked into the OS of the phone, far outperformed Alexa in the Command section.

Munster says that the continued rate of improvement "continues to surprise" based on the notable improvements that each voice assistant has demonstrated over the course of the last few years.

In the future, Loup Ventures expects to see further improvements from extending the feature sets of each voice assistant.

JetLaw
I'm not sure about the methodology they used to reach these results, but my anecdotal experience is that Alexa does a MUCH better job than Siri on almost everything I've tried to use them for.
Rating: 36 Votes

airwalk331
Does anyone else feel like this is crap? 99.8% of the time Siri doesn’t work for me (though my friends’ Alexa does). Period. It’s even worse when I try to use it and there are 2 or more apple devices in the vicinity.
Rating: 34 Votes

MallardDuck
* Local - Where is the nearest coffee shop?
* Commerce - Order me more paper towels.
* Navigation - How do I get to Uptown on the bus?
* Information - Who do the Twins play tonight?
* Command - Remind me to call Jerome at 2 pm today


Most of Siri's brain-deadness is in the voice recognition portion of the system.
Rating: 32 Votes

mediotanque
This is ********. Siri is the dumbest Ai at the moment. Even Cortana works better than Siri.
Rating: 14 Votes

now i see it
I'd like to see a stat of the percentage of iPhone users who've given up on Siri entirely & switched her off forever. Probably mostly everyone.
Rating: 14 Votes

Does anyone else feel like this is crap? 99.8% of the time Siri doesn’t work for me (though my friends’ Alexa does). Period. It’s even worse when I try to use it and there are 2 or more apple devices in the vicinity.


Nope, never got all the siri hate. I have very few issues with using Siri, I use it daily around my house.
Rating: 14 Votes

ChrisMoBro
From my experience of using both, Siri doesn’t even come close to Alexa. Using it is just a painful experience in comparison.
Rating: 12 Votes

MrGimper
My experience of Siri is that it’s truly garbage. I’ve resorted to just using it to set timers. I have several Echo’s in the house with a Sonos setup and Hue lights and Alexa is beyond amazing at understanding what we’re saying and controls all that. As a consequence I no longer look for HomeKit compatibility, rather Alexa compatibility.
Rating: 12 Votes