Employees who worked on the transcription were not told where the audio was recorded or how it was obtained, nor were they told why Facebook needs conversations transcribed. 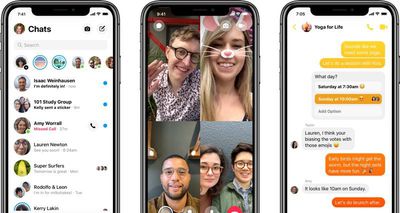 Facebook says that while it had indeed been transcribing audio, it no longer plans to do so. "We paused human review of audio more than a week ago,” Facebook told Bloomberg.

Facebook says that users who had voice chats transcribed had opted in, and that the transcriptions were used to make sure Facebook’s AI correctly interpreted the messages. Despite this, Facebook did not disclose to users that third parties may be reviewing audio, which led some of Facebook’s contractors to “feel their work is unethical.”

Facebook’s data use policy does mention the collection of “content, communications, and other information,” but there’s no specific mention of audio.

Facebook says its “systems automatically process content and communications you and others provide to analyze context and what’s in them.” It includes no mention of other human beings screening the content. In a list of “types of third parties we share information with,” Facebook doesn’t mention a transcription team, but vaguely refers to “vendors and service providers who support our business” by “analyzing how our products are used.”

Google and Apple have temporarily suspended their human audio review programs, while Amazon is letting Alexa users opt out. In the future, when Apple re-implements human review of Siri queries, there will be a clear privacy policy and opt-out option.

handsome421
Facebook: "Yeah you know that totally invasive, unethical, privacy-denying stuff that we were doing just a minute ago? Yeah we're totally not doing that anymore and you're actually not 'dumb *****' for trusting us like Mark Zuckerberg, our provably-human CEO said."
Score: 18 Votes (Like | Disagree)

coolbreeze
Example # 397 of Facebook having zero respect for personal information.

But guyz, this is a one-off misunderstanding, promise! Sure thing bub.

Seriously, delete your effing account already. That place is beyond toxic and frankly dangerous.
Score: 11 Votes (Like | Disagree)

urgs
I understand, why you have to transcribe audio recordings to improve a voice recognition system like Siri, Alexa or Google Assistant.

Rob_2811
Least shocking news story of the week, we have a winner.
Score: 9 Votes (Like | Disagree)

baryon
Hello fellow Humans! It is me, Mark Zuckerberg!
We are happy to announce that as of yesterday, we have put our Privacy Violating Practices™ temporarily on hold, so all is well! Please continue to use Messenger Audio Messages™, and rest assured that no Human will be listening in on them (including me, obviously)! Please also speak clearly and slowly to ensure that your Friends™ can hear you.
C:\dev\file.c(467) : error C2143: syntax error : missing ';' before 'type'
Score: 9 Votes (Like | Disagree)
Read All Comments