In the sixth beta, changes and updates are getting more minor than changes made in earlier betas, but beta 6 still has some notable additions that are worth highlighting. 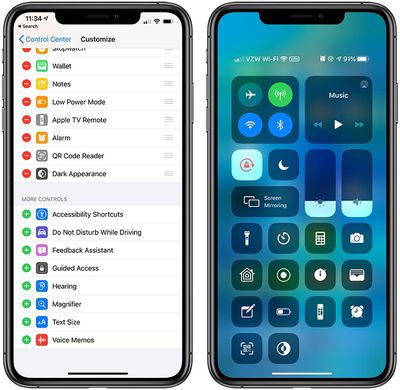 - Announce Messages - The Setting for allowing Siri to announce incoming text messages when connected to second-generation AirPods and some Beats headphones has been removed in iOS 13 beta 6.

- Three Finger Tap - You're now able to three finger tap anywhere in iOS to bring up undo, redo, cut, copy and paste icons, which may be a bug.

- Bluetooth Permission Updates - When installing an and syncing a device over Bluetooth, Apple will warn that the app "may also use Bluetooth to know when you're nearby."

- Analytics Privacy Policy - There's a new paragraph in Apple's analytics privacy policy: "If you agree to send Analytics information to Apple from multiple devices that use the same iCloud account, we may correlate some usage data about Apple apps across those devices by syncing using end-to-end encryption. We do this in a manner that does not identify you to Apple.

- Location Privacy Policy - There's also a new addition to the location privacy policy: "System Customization: Your ‌iPhone‌ will customize system appearance, behaviors, and settings using your current location, for example by automatically enabling Smart Charging when you are at home. This customization data does not leave your device."

- Volume Tweaks - There are once again 16 volume increments instead of the 34 from the previous beta.

- LTE Icon - The LTE/4G icon is back to its regular size and is no longer larger to match the height of the LTE bars.

Neepman
What kind of boneheadedness is it to remove contrast on the folders? I bet it sure looked great on the developers monitor though.
Score: 24 Votes (Like | Disagree)

alayal
What about battery drain in watchOS 5?
Score: 13 Votes (Like | Disagree)

Return Zero
I'd prefer 24 volume increments. Not trying to be picky, but in practical use I feel like 16 isn't enough and 34 was too many.
Score: 12 Votes (Like | Disagree)

My button started acting up from pressing it too many times. I couldn't just hold the button down either because it would jump to the max instantaneously causing earache or temporary hearing loss.
Score: 12 Votes (Like | Disagree)

Tuesday October 4, 2022 3:30 am PDT by Hartley Charlton
The European Parliament today voted overwhelmingly in favor of enforcing USB-C as a common charging port across a wide range of consumer electronic devices, including the iPhone and AirPods, by the end of 2024. The proposal, known as a directive, forces all consumer electronics manufacturers who sell their products in Europe to ensure that a wide range of devices feature a USB-C port. This...
Read Full Article • 314 comments