Thousands of employees are currently testing the card, and Apple will be ready to debut it soon. Cook did not provide a specific date in August for the launch, so it could come at any time. 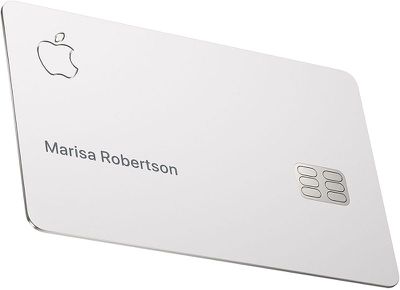 Created in partnership with Goldman Sachs, the ‌Apple Card‌ is deeply integrated with Apple Pay and the Wallet app, though there is also a physical titanium card that can be used for in-person purchases.

Cash back is provided in the form of "Daily Cash" that, as the name suggests, is paid out to customers on a daily basis. Daily Cash is added to the Apple Cash card in Wallet and can be used for purchases, sent to friends, or transferred to a bank account.

In the Wallet app, Apple will offer spend tracking and other budgeting tools. Color-coded categories will give users an idea of how much money they're spending on food, activities, shopping, health care, entertainment, and more.

‌Apple Card‌ will be limited to the United States at launch, but may expand to additional countries in the future. For more details on the ‌Apple Card‌, make sure to check out our Apple Card guide.

I dunno it’s hard to get excited over a credit card.

At this point in life I try to stay debt free and not worry about credit scores.

Fact is, unless you will never apply for a mortgage, car loan, job, or insurance, credit scores are important. Aside from the obvious loan applications, some companies use them as a barometer of how trustworthy a person is (job or insurance).

Having a credit card is not debt if you pay the balance when due. Doing this using a good reward card, means you reap rewards (cash back, miles, etc) for doing nothing more than following your normal spending pattern using a different more beneficial modus.
Score: 16 Votes (Like | Disagree)

iapplelove
I dunno it’s hard to get excited over a credit card.

At this point in life I try to stay debt free and not worry about credit scores.
Score: 13 Votes (Like | Disagree)

them getting into the credit card business is like McDonald's now selling lumber. What's next? Mattresses?

brinary001
God I'm so ready for this you guys don't even know lol
Score: 10 Votes (Like | Disagree)

Narrator Jack
Seems to me it should be 5% for Apple Store purchases, not 3%. Amazon can afford/negotiate 5% back on store purchases with two cards from two banks (Synchrony's Amazon Store Card and Chase's Prime Rewards Visa), and APPLE can't?
Score: 10 Votes (Like | Disagree)

alexandr
that's great. hopefully it's sooner rather than later...
Score: 8 Votes (Like | Disagree)
Read All Comments

Thursday December 1, 2022 4:37 pm PST by Juli Clover
With the launch of iOS 16.1, Apple rolled out a Emergency SOS via Satellite, which is designed to allow iPhone 14 owners to contact emergency services using satellite connectivity when no cellular or WiFi connection is available. The feature was put to the test in Alaska today, when a man became stranded in a rural area. In the early hours of the morning on December 1, Alaska State Troopers ...
Read Full Article • 182 comments

Thursday December 1, 2022 10:48 am PST by Joe Rossignol
Do-it-yourself repair website iFixit today shared a video teardown of Apple's new 10th-generation iPad, providing a closer look inside the tablet and revealing why the device lacks support for the second-generation Apple Pencil. The teardown reveals the internal layout of the iPad, including its two-cell 7,606 mAh battery, logic board with the A14 Bionic chip, and more. As suspected, the...
Read Full Article • 68 comments