Apple yesterday announced that it has agreed to acquire the majority of Intel's smartphone modem business. The $1 billion transaction is expected to close in the fourth quarter of 2019, subject to regulatory approvals. 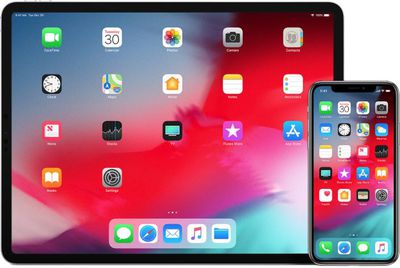 Understandably, the acquisition may enable Apple to accelerate development of its own 5G modem, with Reuters citing a source who claims the iPhone maker wants to have an in-house chip ready for use in some of its products by 2021, compared to previously reported timeframes of between 2022 and 2025.

New details lower down: Apple has partnered with Global Unichip, a design house connected to TSMC, on a modem design effort, and has an aggressive goal of 2021 for a working chip (vs the 2025 estimate previously reported by @aatilley ) https://t.co/h7106MAPgy — Stephen Nellis (@StephenNellis) July 25, 2019

Apple's transition to custom 5G modems will likely happen in phases, starting with lower-end and older models of devices, according to the report. Apple has a multiyear chipset supply agreement with Qualcomm, and a six-year patent license agreement, so it certainly does not have to rush the process.

The report does not explicitly mention the ‌iPhone‌, so the first product with an Apple-designed modem could very well end up being an iPad. In any case, the transition away from Qualcomm will likely take years, as its modems lead the industry in performance and worldwide compatibility.

In the interim, Intel is expected to supply LTE modems for 2019 iPhones, with Apple returning to Qualcomm for the first 5G-enabled iPhones in 2020.

Qualcomm is about to lose the war. Couldn't have happened to "nicer" folks.

Dude, I am amused. What has Qualcomm ever done to you, personally?

And, on topic, which company is "nice" when negotiating advantage?
[Apple told its sapphire supplier ‘Put on your big boy pants’]
Score: 13 Votes (Like | Disagree)

Lone Deranger
This from a company who can't even make a wireless charger? Hahahahahahahahaa.... :D


(....and before the Apple Defense League minions jump down my throat: it's a joke, relax )
Score: 11 Votes (Like | Disagree)

anshuvorty
I just don't understand how a change in management can result in a change of performance in these chips. Can someone explain why Apple acquiring Intel's miserable Modem's division, which couldn't produce Qualcomm-levels of performance in these 4G chips, suddenly being managed by Apple, will allow this same team to produce chips that will beat Qualcomm's designed chips in 2-5 years? If Intel couldn't make this team produce great chips, how can Apple make this same team produce great chips?

AKA, what does Apple have that Intel doesn't have?
Score: 9 Votes (Like | Disagree)

I just don't understand how a change in management can result in a change of performance in these chips. Can someone explain why Apple acquiring Intel's miserable Modem's division, which couldn't produce Qualcomm-levels of performance in these 4G chips, suddenly being managed by Apple, will allow this same team to produce chips that will beat Qualcomm's designed chips in 2-5 years? If Intel couldn't make this team produce great chips, how can Apple make this same team produce great chips?

AKA, what does Apple have that Intel doesn't have?

My guess is that Apple won't be subject to the same business considerations that Intel has.

I might be wrong, but while Apple was pretty much Intel's only customer for their modems, Intel's modems were still designed for the entire industry. When your only concern is that your own modems need only work with your own devices, as opposed to every other smartphone on the market, that gives engineers a lot more leeway on what they can do (and what they don't need to do).

So Intel's modems don't have to be strictly better than Qualcomm's. They simply need to do what Apple needs it to do, and between that and the hardware / software integration that Apple is famous for, they just might be able to trick out superior (or at least, comparable) performance.

In a sense, it's like how Apple was able to use its clout to push developers towards converting their apps to 64-bit, which meant their A-series processors no longer need to support 32-bit code, while Qualcomm's chips probably still do.
Score: 7 Votes (Like | Disagree)

blcamp
Qualcomm is about to lose the war. Couldn't have happened to "nicer" folks.
Score: 7 Votes (Like | Disagree)
Read All Comments

Saturday May 21, 2022 9:00 am PDT by Hartley Charlton
With around four months to go before Apple is expected to unveil the iPhone 14 lineup, the overwhelming majority of rumors related to the new devices so far have focused on the iPhone 14 Pro, rather than the standard iPhone 14 – leading to questions about how different the iPhone 14 will actually be from its predecessor, the iPhone 13. The iPhone 14 Pro and iPhone 14 Pro Max are expected...
Read Full Article • 348 comments