Apple has a plan to start funding original podcasts in order to better compete with Spotify, according to a new report from Bloomberg. Apple executives have been reaching out to media companies to discuss exclusive buying rights for podcasts, which would be exclusive to Apple.

While Apple has yet to outline a clear strategy for its plans, the company will be pursuing "the kind of deals it didn't make before," according to Bloomberg. Apple has also been funding original content for its upcoming Apple TV+ series, which could account for its decision to also bankroll other kinds of exclusive content.

Apple does not make money from its Podcasts app, but has previously expressed interest in exclusive content as a way to draw and retain customers. Apple has used such exclusives for Apple Music, its music streaming service.

The news has caused Spotify's stock to fall 2 percent so far as any effort on Apple's part to delve deeper into podcasts could impact Spotify's efforts to become a major source for podcast content. 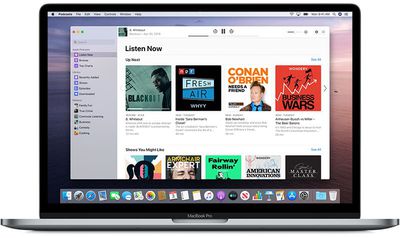 Apple's Podcasts app is installed on iOS devices by default, and starting with macOS Catalina, the Podcasts app is a standalone app. Apple's decision to split Podcasts out into its own app makes more sense if the company is indeed planning to invest money into original and exclusive podcasts.

Two years ago, Spotify said it was "coming after" Apple with a strong push into podcasting content, and this year, Spotify made a serious effort to become a premium podcast destination.

Spotify has also made an effort to fund new and original podcast content, with the aim of becoming the Netflix of podcasts.

CaTOAGU
If this is another subscription service it's DOA as far as I'm concerned. Podcasting in general isn't going to be improved by the involvement of mega corps creating silos for their original content. No existing podcaster really benefits from this, and no one seeking to get involved really needs their involvement either. Podcasting is one of the few corners of the internet that still exists unencumbered by proprietary lock in/out. Thus, in my opinion, Spotify and Apple should not be putting up those barriers, it's a solution for which there is no problem.
Score: 15 Votes (Like | Disagree)

now i see it
i doubt anyone will care or notice
Score: 10 Votes (Like | Disagree)

FasterQuieter
Sounds worrying to me. I don't want any podcasts walled off anywhere. Perhaps they should just pay people not to go to Spotify.
Score: 7 Votes (Like | Disagree)

rpmurray
There goes the neighborhood.
Score: 5 Votes (Like | Disagree)

FaustsHausUK
Great, another form of content where users have to dick around with different apps to access all the content they like. The biggest selling point of podcasts was that they were decentralised. Shoving them behind app-specific paywalls is stupid.
Score: 4 Votes (Like | Disagree)

mox358
It would be nice to get better tools for creating/editing podcasts in GarageBand and Logic. I really hope this isn’t “Apple Podcasts +” and costs $9.99 per month though
Score: 4 Votes (Like | Disagree)
Read All Comments