On a recent episode of the RBC Disruptors podcast with host John Stackhouse, Apple's former retail chief Angela Ahrendts revealed that Apple's retail employee retention rate rose from 61 percent to a "historic high" of "nearly 89 percent" during her five-year tenure at the company. 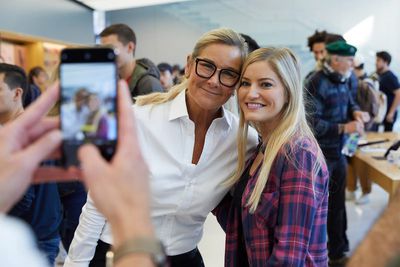 Ahrendts, left, with YouTube star iJustine
"I don't feel that Apple retail is facing near the headwinds that maybe a lot of other retailers are because we've spent the last five years almost changing and evolving, and refocusing if you will," added Ahrendts, citing strong retention rates, redesigned stores, improved communication tools, and more.

Of course, with Apple being one of the world's largest companies, Ahrendts admitted that "there's a challenge a day."

"I think when you run a business that big and that global, and nearly 70,000 employees when I left, there's a challenge a day. I think that if it is a challenge, it's your job to fix the challenge. So when I came in, there were a lot of systems that weren't connected, there wasn't a way to communicate."

Under Ahrendts, Apple introduced new communication tools for its retail employees, including a "Hello" app that provides a daily summary of "need to know" information and a "Loop" app that allows retail employees to share useful tips and tricks amongst each other to help do their jobs better.

Ahrendts also reflected on being recruited by Apple CEO Tim Cook, her early days at Apple, her vision of the retail industry as a whole, and much more. The full interview can be listened to on SoundCloud or Apple Podcasts.

yesjam
To be expected considering that during Ahrendts' tenure Apple decidedly moved toward hiring retail workers with fewer skills and less opportunity outside the company.
Score: 48 Votes (Like | Disagree)

HoneyCrispAF
This is at best misleading, not to mention irrelevant to HER as an executive. I know many many employees and customers that found her irritating and are happy to see her leave. The retention rate has ZERO to do with her, and 100% to do with the flat economy for younger generations entering the work force or older workers laid off in the 2008 disaster.

Apple isn't a bad gig in your 20's and even early 30's as far as retail goes (health care, 401k, tuition reimbursement and the usual benefits package even at part time).

My time in an Apple Store I've meant some highly educated super bright employees, and often wonder why is he/she here doing this? I often let them speak and ask questions, even though I need limited help I'm interested in the company as a share holder. I find many of employees over qualified, extremely bright, over worked, and worst of all directed to be over attentive to a point of awkwardness by what id imagine is a directive from upper management?

The customers in these stores not happy with the service fail to understand the scale at which Apple operates, this is not a mom and pop shop. People buy these products in the 100's of millions, and they break them and things go wrong is a small percentage (true of ANY product). The expectation of the consumer is Apple's own doing, placate to every complaint for years and you have created the perfect monster. Angela created this dissatisfaction with her luxury brand background and hyper attentiveness and odd luxury item releases. A gold watch, really??

She has left the company's retail weaker through lack of vision of what the company has always stood for: Creativity, Innovation, and Being Freakin' Cool. All three of these are lacking in the stores as she walks off with her 73+ million dollar salaryo_O
Score: 24 Votes (Like | Disagree)

Plus, people might have been staying for the wrong reasons...like a cush job with little responsibility.

Until we get the numbers for Apple retail stores, we can only speculate they struggled enough for Apple to make a change.

Only on MR would high employee retention rate be spun as a negative. o_O
Score: 18 Votes (Like | Disagree)

tremlock
and the Retail experience at the Apple stores is still terrible. Make an appointment and they will see you sometime within a 2 hour window once you arrive, just go stand over against the wall with all the other appointments
Score: 17 Votes (Like | Disagree)

Ubuntu
I think it's considered notable given the narrative that Apple retail worsened on Ahrendts's watch. Might not be interesting to you but this site is for multiple people. ;)
Score: 16 Votes (Like | Disagree)

I think it's considered notable given the narrative that Apple retail worsened on Ahrendts's watch. Might not be interesting to you but this site is for multiple people. ;)

Plus, people might have been staying for the wrong reasons...like a cush job with little responsibility.

Until we get the numbers for Apple retail stores, we can only speculate they struggled enough for Apple to make a change.
Score: 14 Votes (Like | Disagree)
Read All Comments