Apple in June launched a voluntary recall and replacement program for 15-inch MacBook Pro models with Retina display sold between September 2015 and February 2017, citing defective batteries that could overheat and pose a fire safety risk.

Right after the replacement program was announced, designer Steven Gagne shared some images of a ‌MacBook Pro‌ that caught fire, and those images were today surfaced by PetaPixel, giving us a look at why 2015 ‌MacBook Pro‌ owners should take this recall seriously. 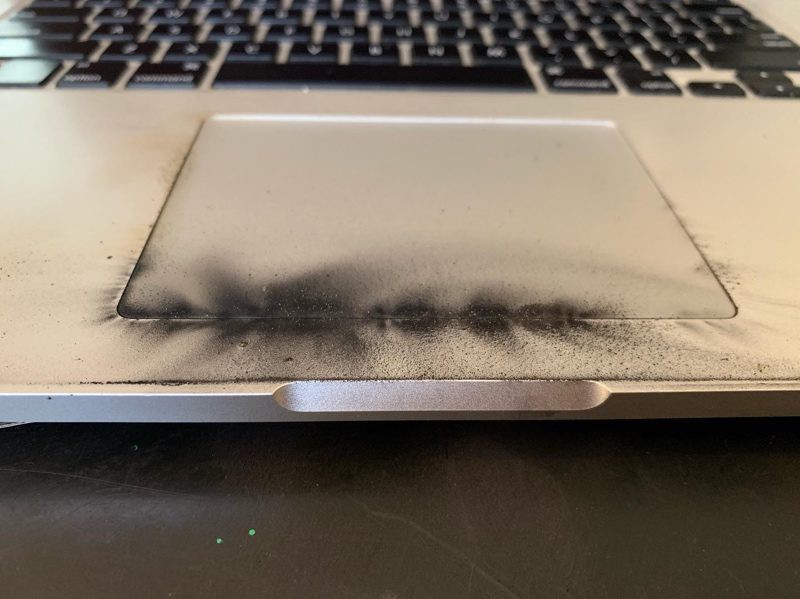 Gagne said that the battery in his ‌MacBook Pro‌ exploded, causing a small fire and filling his house with smoke. He heard the sound of the battery popping, and then smelled a strong chemical scent. The ‌MacBook Pro‌ wasn't plugged in and it was in sleep mode.

He was able to get to it quickly enough to extinguish the fire before it did real damage, but the seriousness of the damage to the ‌MacBook Pro‌ emphasizes that this could have been far worse.

Apple has asked customers with a 15-inch ‌MacBook Pro‌ from 2015 to stop using it until the battery inside can be replaced. Apple has a website outlining the recall program, with ‌MacBook Pro‌ able to enter a serial number to see if they need a battery replacement.

The recall affects the 15-inch ‌MacBook Pro‌ from 2015 and does not impact later models released in 2016 and beyond. Those with 15-inch 2015 machines will need to visit an Apple retail location, an Apple Authorized Service Provider, or contact Apple support to arrange a mail-in repair.

You can determine which Mac you have by clicking on the Apple logo in the menu bar and selecting "About This Mac." The year of the machine is listed in parentheses, and affected machines will say "15-inch, Mid 2015."

According to the U.S. Consumer Product Safety Commission, Apple has received a total of 26 reports of batteries overheating, including five reports of minor burns and 17 reports of minor damage to nearby personal property.

ugahairydawgs
That hole in the bottom has got to help with ventilation, right?
Score: 22 Votes (Like | Disagree)

calzon65
That would not be good in an airplane :eek:
Score: 14 Votes (Like | Disagree)

swingerofbirch
A long time ago I sent in a 13" MBP for repairs to the display, and while it was the depot they found the battery was swollen and replaced it.

But it wasn't at all visible from the outside. Sort of scary that this could be lurking in your laptop and you wouldn't know about it.

Tuesday May 26, 2020 2:31 am PDT by Tim Hardwick
Apple will use a Lightning port instead of USB-C in the upcoming "iPhone 12," but it will be the last major series of Apple's flagship phones to do so, with models set to combine wireless charging and a port-less Smart Connector system for data transfer and syncing in the iPhone "13 series" next year. The above claim comes from occasional Apple leaker and Twitter user "Fudge" (@choco_bit),...
Read Full Article • 392 comments

Thursday May 28, 2020 8:13 am PDT by Eric Slivka
With the release of macOS Catalina 10.15.5 and related security updates for macOS Mojave and High Sierra earlier this week, Apple is making it more difficult for users to ignore available software updates and remain on their current operating system versions. Included in the release notes for macOS Catalina 10.15.5 is the following:- Major new releases of macOS are no longer hidden when...
Read Full Article • 312 comments

Friday May 29, 2020 10:00 am PDT by Eric Slivka
Following a couple of leaks in recent weeks, Beats today is officially announcing four new colors for its Powerbeats Pro wireless earphones: Spring Yellow, Cloud Pink, Lava Red, and Glacier Blue. The new earphones will go on sale June 9 and sell for the same $249.95 price as the existing color options. Aside from the colors, the new Powerbeats Pro models are otherwise identical to the...
Read Full Article • 47 comments