Samsung yesterday announced plans to hold an event on Wednesday, August 7 in New York City, where it will unveil the next-generation Galaxy Note device.

Samsung splits its smartphone unveilings into two events each year, and in February unveiled its Galaxy S10 and Galaxy S10+. The Galaxy Note line is Samsung's larger smartphone equipped with a stylus, and the Note 10's unveiling will come just about a month ahead of when we're expecting to see Apple's 2019 iPhone lineup. 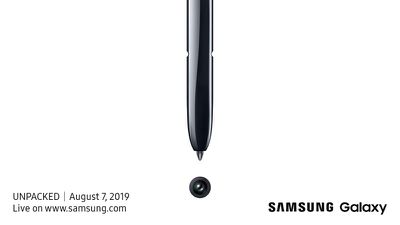 There were no details provided about the upcoming device, but Samsung says it is going to "unveil new devices designed to take the Galaxy ecosystem's connectivity to the next level." The event's invite features an S-Pen and a camera lens.

Rumors and leaked design renders suggest the Galaxy Note 10 will feature 6.28 and 6.75-inch glass bodies (two sizes are rumored) with the same boxy design used in previous note devices. The front is said to feature an edge-to-edge display with a single center hole punch camera while the back is said to include a quad-camera setup.

There are three traditional cameras (12-megapixel wide-angle, 12-megapixel ultra wide-angle, and 12-megapixel telephoto) along with a fourth time-of-flight 3D depth camera, which is a feature that rumors have indicated Apple will bring to the ‌iPhone‌ in 2020. It's also supposed to include an under-display fingerprint sensor like the Galaxy S10, and 5G variants may be offered as well.

Samsung may also use its upcoming August event to provide more detail on when we can expect the delayed Galaxy Fold to launch. Samsung planned to release it earlier this year but then canceled its debut after multiple poor reviews from media sites.

Samsung has also shown off a Bixby smart speaker several times, which is designed to compete with the HomePod. The Galaxy Home speaker has not yet launched and little has been said about it recently, but we could hear more at the Unpacked event.

We don't know when Apple will unveil its own 2019 smartphone lineup, but based on past years, we can expect the Cupertino-based company to hold an event somewhere around the first or second week of September, with September 9 or September 10 being likely possible candidates.

Apple plans to offer its 2019 iPhones in three sizes, identical to the current ‌iPhone‌ lineup. The two higher-end devices will continue to use OLED, while the ‌iPhone‌ XR successor will feature an LCD and a cheaper price tag.

The ‌iPhone‌ XS and XS Max successors will use triple-lens cameras, while the XR successor will feature a dual-lens camera. The camera updates will be the biggest changes to the iPhones in 2019.

No 5G connectivity is coming this year, but faster WiFi and LTE is expected, as are some neat little tweaks like bilateral wireless charging for charging AirPods and other devices with the ‌iPhone‌. A much more substantial update with 3D cameras, new sizes, and 5G is expected in 2020. For more on the 2019 iPhones, make sure to check out our roundup.

bladerunner2000
Who would have thought that Samsung would eventually beat Apple on aesthetics?
Score: 26 Votes (Like | Disagree)

fanbrain
Samsung gets the rear-mounted multi camera layout and aesthetic. Apple, not so much.
Score: 23 Votes (Like | Disagree)

Let me know when they have. I'm still waiting.

Who would have thought that Samsung would eventually beat Apple on aesthetics?

Let me know when they have. I'm still waiting.


Samsung is smart to launch a month before the iPhone. They can try to sell a few before the tsunami that is the iPhone comes out and steals the spotlight from virtually everyone.