Apple in June unveiled new versions of iOS, macOS, watchOS, and tvOS, but the TV update, tvOS 13, hasn't received much coverage, so we thought we'd go hands-on with the software so MacRumors readers know what to expect when tvOS 13 launches this fall.

tvOS updates are always more minor in scale than other software updates, but tvOS 13 brings a decent number of new features worth checking out.

Subscribe to the MacRumors YouTube channel for more videos.
After installing tvOS 13, the first thing that's noticeable is a new Home screen. The updated Home screen does away with the top menu bar and the Watch Now screen that used to be front and center, replacing it with icons that include Apple TV, the App Store, iTunes movies, iTunes TV shows, and Apple Music.

Watch Now is now only accessible within the TV app rather than being available right when you turn the ‌Apple TV‌ on. Instead of displaying Watch Now content, highlighting the TV app on the Home screen offers up a "What to Watch" interface with content recommendations. 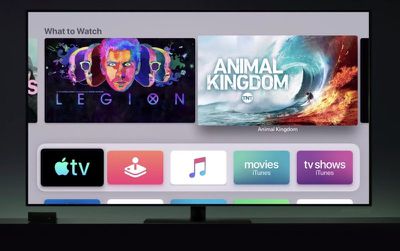 Highlighting the ‌App Store‌ brings up app recommendations, and the same is true for Movies and TV shows. The ‌Apple Music‌ icon shows "Today's Video Hits" with autoplay silent video.

Apps are able to play full-screen video previews right on the Home screen, which is similar to how content autoplays in Netflix when you're browsing through available TV shows and Movies.

tvOS 13 brings a new Picture-in-Picture mode, designed to let you watch TV shows or movies while you're navigating through the rest of the tvOS 13 operating system. Controls at the bottom of the picture-in-picture interface allow for returning to full screen, pausing content, and closing the picture-in-picture window.

Multiple users are supported in tvOS 13, so more than one profile is available on the ‌Apple TV‌. Each member of the family can sign into their own ‌Apple TV‌ profiles to get customized Watch Now lists, content recommendations, and ‌Apple Music‌ playlists. Switching between profiles can be done through the new Control Center. The Control Center includes the time and date, easy access to search, a Now Playing widget, AirPlay controls, a sleep feature, and an option to switch between users.

There's a new ‌Apple Music‌ feature that displays scrolling lyrics synced in time with the music that's playing, and Apple has added a new Wireless Audio Sync option that uses the iPhone's microphone to calibrate audio synced to ‌Apple TV‌, such as through a speaker system.

tvOS 13 gets the ‌Apple TV‌ ready for Apple Arcade, Apple's upcoming subscription gaming service. As part of ‌Apple Arcade‌ preparations, Apple has added support for the Xbox Wireless Bluetooth Controller and the PlayStation DualShock 4 Controller, allowing gaming controllers many people already have at home to be used with ‌App Store‌ games.

There are also new screensavers in tvOS 13, which were created by the BBC Natural History Unit, aka the team behind the "Blue Planet" series. These new screensavers showcase the deep ocean around the world, showing off under-the-sea creatures and scenes. The new screensavers don't appear to be active in the beta, but will be available when tvOS 13 launches.

Right now, tvOS 13 is available to both developers and public beta testers, and Apple is planning to launch it in the fall after a few months of beta testing to work out bugs and refine features.

For more on what's coming in tvOS 13, make sure to check out our tvOS 13 roundup.

Apps are able to play full-screen video previews right on the Home screen, which is similar to how content autoplays in Netflix when you're browsing through available TV shows and Movies.

One of the worst features about Netflix and they bring it system wide to Apple TV. Fantastic.
Score: 44 Votes (Like | Disagree)

One of the worst features about Netflix and they bring it system wide to Apple TV. Fantastic.

My thoughts exactly. I want an option to disable this system-wide.
Score: 19 Votes (Like | Disagree)

Frankied22
That autoplay when browsing garbage needs to be removed ASAP. I absolutely hate that in Netflix. I want to just browse for what I want to watch and if you leave the selection on one thing for a second too long suddenly its blaring some trailer garbage in my face.
Score: 19 Votes (Like | Disagree)

One of the worst features about Netflix and they bring it system wide to Apple TV. Fantastic.

Agreed. It distracts me from making my decision and presents my kids with shows I don’t necessarily want them to watch. Not a single redeeming benefit to my viewing.
Score: 10 Votes (Like | Disagree)

Saturday May 21, 2022 9:00 am PDT by Hartley Charlton
With around four months to go before Apple is expected to unveil the iPhone 14 lineup, the overwhelming majority of rumors related to the new devices so far have focused on the iPhone 14 Pro, rather than the standard iPhone 14 – leading to questions about how different the iPhone 14 will actually be from its predecessor, the iPhone 13. The iPhone 14 Pro and iPhone 14 Pro Max are expected...
Read Full Article • 219 comments