At WWDC today, Apple unveiled its much-anticipated Mac Pro redesign, and following its keynote the company offered journalists some brief time with the machine – although admittedly nobody was allowed to use or even touch it. 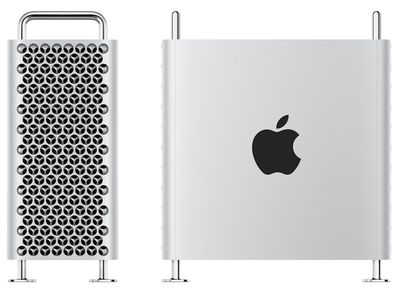 With that in mind, we've highlighted some of the more interesting quotes from those who were lucky enough to get up close with Apple's most powerful Mac to date.

Unsurprisingly given the "hands-off" nature of the preview, TechRadar opined on the aesthetics of the redesigned Mac Pro:

For those that were unconvinced about the previous Mac Pro's design, this is far more industrial. Designed to be modular, the Mac Pro's leanings are far more traditional with the combination of brushed aluminum and heat sink holes festooning the outer shell.

It's brutal and says 'this is for working on, not to look good'. It can be rack mounted, and you can screw wheels on the bottom to move it around an office or studio.

Image credit: TechRadar
TechCrunch was less impressed with the look of the new ‌Mac Pro‌, and questioned the "cheese grater" industrial design choice.


It’s uncanny how much this thing looks like a cheese grater. Of course, this isn’t the first time the Pro has looked like that; A well-liked previous iteration had a grater-esque style, but this new one takes things much further. There are of course some thermal benefits to having a perforated case, but surely there are other ways to accomplish that.

Gripping the handle on top of the ‌Mac Pro‌ and lifting the lid exposes the internal components, and Engadget noted how this makes the internals "relatively accessible" compared to the previous design.

One of the machine's biggest selling points -- aside from its sheer graphical and compute performance, of course -- is how relatively accessible the internal components will be. (Fun fact: Lifting the handle automatically shuts down the machine so that you don't electrocute yourself or anything.)

Image credit: Engadget
As for the display, Engadget said:


Five minutes in a crowded pit is not long enough to judge on the quality of the display. That said, it's certainly striking. 6K is all well and good, but it's HDR where Apple's efforts push new ground. The company says its panel can hold 1000 nits of brightness across the panel indefinitely -- VESA only requires a 1,000-nit "full-screen flash" to put a panel its highest DisplayHDR 1000 tier.

The Verge chose to focus on the sheer power of the new ‌Mac Pro‌, which is heavily geared towards video, music, and photo editing.

"Demo" is a bit of a misleading word in this case, as we weren’t actually allowed to touch the machines or run any kind of real-world tests. But we were able to see the new Mac Pro running software like Logic, Lightroom, and Final Cut Pro X. By all accounts, it seems like even the base version of the Mac Pro is among the most powerful creative production and editing machines Apple has ever concocted.

Here at WWDC 2019, the company set up a live professional photo shoot equipped with an iPad Pro to get live preview shots straight from the camera and editing on a MacBook Pro wired up to the new Pro Display XDR in portrait mode (using the $1,000 stand that you’ll have to buy separately). The workflow looked pretty flawless, showing off the Pro Display XDR’s HDR capabilities and high-nit brightness when it’s used as the foundation for RAW photo work like this.

tencentcat
I can’t wait to set this up for a rich client that must have the very best for their web browsing.
Score: 48 Votes (Like | Disagree)

mytdave
Wow. I used to think folks on Mac forums understood technology. Guess I'm mistaken. Some of you do, but holy cow, the rest of you?

Apple has built a kick-ass workstation here, at an incredible price (it's about damn time). This is NOT an iMac Pro sans display. It's in a completely different category. This Mac finally competes with the likes of HP and Dell workstations, and bests them in many ways (i.e. gobs of Thunderbolt ports, 10Gb ethernet, "Afterburner" accelerator card option, MPX module options, etc.).

Run on over to hp.com, and custom configure yourself an HP Z4 (single socket Xeon CPU box) with identical specs to Apple's entry level config (or as close an equivalent as possible) and then ask yourself if you have any clue how much workstations cost!

Time to educate yourselves.

kingofwale
where is the hands on with the stand?? at 1K, it deserves its own review.
Score: 46 Votes (Like | Disagree)

topgunn
I am curious why the base model Mac Pro is $1,000 more than the base model iMac Pro which has also has an 8-core Xeon and 32GB of RAM but the base model iMac Pro has 4x as much SSD space, a much more powerful GPU, and a 5k display to boot. I get that you are paying for expandibility but the initial price seems high or else the iMac Pro now looks like a screaming good deal.
Score: 44 Votes (Like | Disagree)

gugy
I love the fact Apple made this Mac Pro. I just wish they had a cheaper entry level option at $3/4K price with 1TB/64GB RAM.
The prices are just too insane high.
The display is incredible, but $7k with stand and nano tech is ridiculous. They could have an option @ 5K display at $2500 with stand/nano.

Around $13k to get a MP/Display combo is not a feasible option for most Pro's.
Score: 41 Votes (Like | Disagree)
Read All Comments