Apple today unveiled iPadOS, a new version of iOS that's designed to take advantage of the larger screens in the iPad family. ‌iPadOS‌ will incorporate several features that recognize the tablet's function as a computer replacement, including a new Home screen, an updated Split View to enhance multitasking, improved Apple Pencil support, and additional keyboard shortcuts for use with physical keyboards. 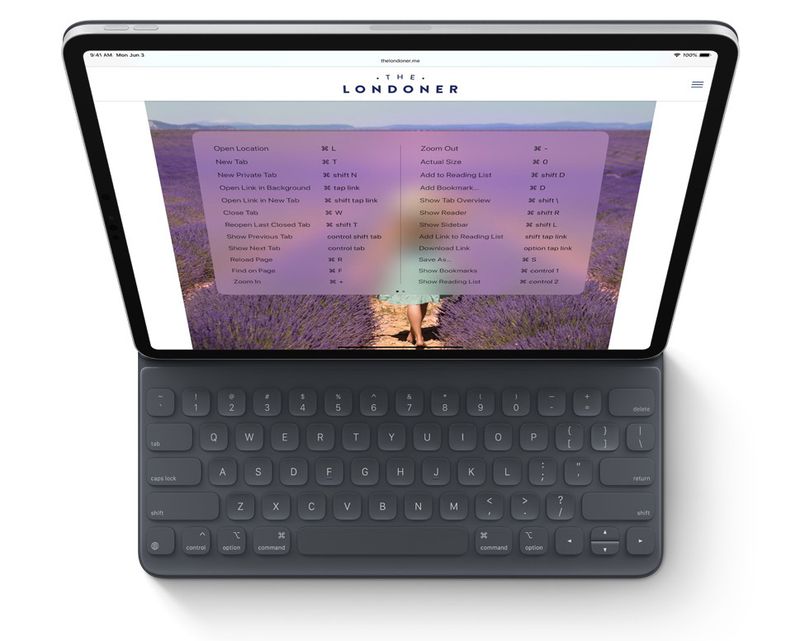 During its WWDC keynote, Apple revealed that Safari for ‌iPadOS‌ will include about 30 additional shortcuts, including the following:

The keyboard shortcuts will work with Apple's Smart Keyboard or any third-party Bluetooth connected keyboard, which should make web browsing and managing files even easier on an ‌iPad‌.

In addition, ‌iPadOS‌ automatically presents the desktop version of a website, scaled appropriately for the ‌iPad‌ display, and optimizes it for touch. Safari for ‌iPadOS‌ also comes with a download manager and enhancements to tab management.

Due to be released in the fall, ‌iPadOS‌ will be compatible with the ‌iPad‌ Air 2 and later, all iPad Pro devices, the fifth-generation ‌iPad‌ and later, and the ‌iPad‌ mini 4 and later.

techpr
Now it needs multi user option and the iPad will be complete.
Score: 11 Votes (Like | Disagree)

itsamacthing
Hope this is the change that makes my iPad less of an iPad and more of a laptop replacement
Score: 3 Votes (Like | Disagree)

currentinterest
Mouse support is available via Accessibility in settings.
Score: 2 Votes (Like | Disagree)

mikehoopes
Mouse, please. I’m a big fan of the stylus, despite it’s stunted functionality compared to 2009’s PC state-of-the-art. However, until the iPad gets a self-cleaning screen and/or allows your arms to relax, it ain’t a laptop replacement.

[edit]: I scrolled a couple more inches down, and saw that mouse support was going to be offered as an “accessibility” option.

Well, count me among the differently-abled when it comes to “smeary-finger-oil-that-even-creates-stylus-friction-on-my-display-but-is-inevitable-due-to-the-zen-ish-buttonless-simplicity-of-the-Apple-Pencil-aversion”!
Score: 1 Votes (Like | Disagree)

SoSickSadNslOw
I think I’ll be using my iPad Pro more often now. Can’t wait to test this out!
Score: 1 Votes (Like | Disagree)
Read All Comments