Apple today revealed "iPadOS," a new version of iOS that Apple has designed specifically for the larger screens on the iPad family. Apple said that it renamed the OS to recognize the "distinctive experience" of ‌iPad‌. 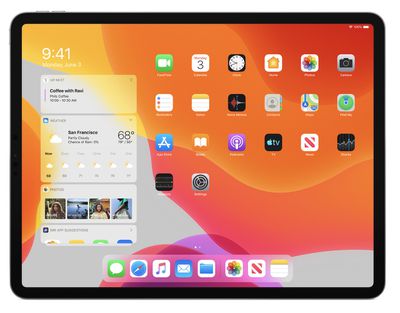 To start, the Home screen has been redesigned with a new layout that shows more apps on each page. The widget-based Today view can be added to the Home screen, providing quick access to news headlines, the weather, events, and more.

To enhance iPadOS even more, Apple updated Split View to allow users to work with multiple files and documents from the same app at the same time. For example, users can have two emails opened side by side in Mail, or two notes in Notes. Slide Over allows users to quickly view and switch between multiple apps, and App Exposé provides for a quick view of every open window.

iPadOS also overhauled Apple Pencil integration with the ability to mark up and send entire webpages, documents, or emails on ‌iPad‌. Users can simply swipe the ‌Apple Pencil‌ from the corner of the display to enter mark up mode, quickly edit the document, and save it. Additionally, iPadOS has reduced ‌Apple Pencil‌ latency to as low as 9 milliseconds.

Another update centers on the Files app, which now has iCloud Drive support for folder sharing. Because iPadOS supports external drives, users can easily plug in a USB drive and transfer data all within the Files app. There's also a new Column View for easier navigation, Quick Actions for creating PDFs, and more.

To ensure all of the new parts of iPadOS could be controlled with ease, Apple is introducing new finger-based gestures for cut, copy, paste, and undo. Other updates include Dark Mode, custom fonts, a new floating keyboard, performance improvements, and updates to Maps and Photos apps.

iPadOS is available to Apple Developer Program members starting today, while the public beta will launch later this month. In the fall, iPadOS will be available as a free software update for the iPad Air 2 and later, all iPad Pro devices, the fifth-generation ‌iPad‌ and later, and the iPad mini 4 and later.

UltimaKilo
This is finally the OS the iPad deserved. This is the greatest WWDC in a long, long time. Apple is back baby!
Score: 39 Votes (Like | Disagree)

twocents
The iPad has always had so much potential, this kicks it up several gears! :D
Score: 35 Votes (Like | Disagree)

This is finally the OS the iPad deserved. This is the greatest WWDC in a long, long time. Apple is back baby!

kuwxman
That sound? That is all the iPad fans yelling: "FINALLY!"
Score: 23 Votes (Like | Disagree)

I think Apple deserves a can't innovate my ass post.

Innovate? These are features people have been begging for ages. Unless there was some huge technical roadblock that was preventing apple from previously adding these features, this is just apple playing catch-up.
Score: 20 Votes (Like | Disagree)