Apple's Powerbeats Pro totally wireless earphones officially went on sale today in the United Kingdom, France, and Germany, as predicted. However, the fitness-focused, Beats-branded earphones are only available in black, and stock appears to be limited. 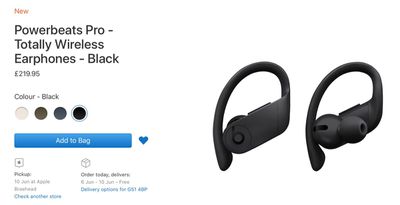 As of writing, Apple's online UK store is switching between allowing customers to add the earphones to their bag, and graying out the Add to Bag button to prevent them from doing so. Delivery dates are also flipping between June 6-10 and "coming soon."

If you're having trouble ordering ‌Powerbeats Pro‌ via Apple's online store, try the Apple Store iOS app, as it appears to be allowing more orders to go to checkout. Customers can also try their luck ordering through the Beats website, which is quoting similar delivery dates.

‌Powerbeats Pro‌ cost £219.95 in the UK and 249.95 euros in France and Germany. They're Apple's first totally wireless Beats earphones, featuring the same H1 chip as the second-generation AirPods for hands-free "Hey Siri" and faster connection speeds between the iPhone, Apple Watch, and other devices. They last up to nine hours per charge, with more battery life available on the go via an included charging case.

The earphones are initially available in black only, with ivory, moss, and navy colors set to become available this summer, although Apple cautions that color availability is subject to change.

‌Powerbeats Pro‌ have been on sale in Canada and the U.S. since early May. In June they will be available in Australia, Singapore, China, Japan, Hong Kong, Korea, Austria, Italy, Spain, Ireland, The Netherlands, Belgium, Russia, Switzerland, Sweden, Mexico, and Brazil.

The cruddy yet overpriced products keep on rolling! iPod and this in the same week.

And you still have the option to not purchase if you don't want to.
Score: 10 Votes (Like | Disagree)

And you still have the option to not purchase if you don't want to.

Yes but it's cooler to dis on stuff you can't afford. :D
Score: 5 Votes (Like | Disagree)

The cruddy yet overpriced products keep on rolling! iPod and this in the same week.

Akrapovic
Argos stores in my area are showing available for pickup on Friday for larger stores and Saturday for smaller stores.

I’d like to think this means our Apple orders will dispatch before Argos stock are in!
Score: 2 Votes (Like | Disagree)

Yes but it's cooler to dis on stuff you can't afford. :D

I hate Bentleys! But if someone wants to send me one, I'll take it. I'll hate it though.
Score: 1 Votes (Like | Disagree)

Akrapovic
Mine have arrived and as expected, they are so good it's almost like a non-event. When you get a new iPhone you can spend hours messing with it and enjoying it. But when you get new bluetooth headphones, the worry is you'll have to spend hours making sure they pair smoothly etc.

These really are as simple as the reviews say. Super impressed. Very much a case of "it just works". I'll give them a proper test during my run tomorrow, but so far so good.
Score: 1 Votes (Like | Disagree)
Read All Comments