Apple's totally wireless Powerbeats Pro earphones become available to pre-order in the United Kingdom on May 31, according to a social media ad posted on the official Beats By Dre U.K. Twitter account. 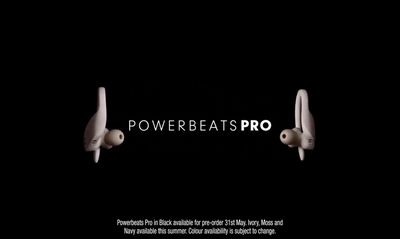 The date was spotted in the small print at the end of the 15-second video short, which features British professional boxer Anthony Joshua and touts the nine hours of listening time offered by the fitness-focused earphones. The promotional ad originally went out on May 27.

The black ‌Powerbeats Pro‌ have been available to pre-order since May 3 in the United States and Canada, with the first deliveries to customers arriving on May 10. However, they remain listed as "coming soon" on Apple's online U.K. store, while fine print on the Beats website for the U.K., France, and Germany simply states that the earphones will begin their rollout later in May.

Extrapolating from the U.K. date in the ad, and given how late in the month we now are, it's highly likely that ‌Powerbeats Pro‌ will also be available to pre-order in black in France and Germany from this Friday, May 31.

The earphones are initially available in black only, with ivory, moss, and navy colors set to become available this summer in the United States and Canada, and most of the countries listed above, although Apple cautions that color availability is subject to change.

The ‌Powerbeats Pro‌ feature adjustable, secure-fit ear hooks and earbud tips with four size options. As mentioned, they last up to nine hours per charge, with more battery life available on the go via an included charging case.

Silverjerk
That's awesome, super happy for the rest of the world. Now, if only they'd stock the shelves here in the US, that'd be great!
Score: 3 Votes (Like | Disagree)

69Mustang
My brother got pair. They actually sound pretty damn good. Even better than my pair of Jabra Elite 65t. Uncle Mike let my youngest listen to them. "Dad, I know what I want for my birthday".
Score: 3 Votes (Like | Disagree)

Wow. At this point I regret all of my replies. With this much energy it would be best directed at Tim Cook. I'm exhausted...need to rest before placing my preorder in the morning.

Bro, this is a forum. You want short and sweet, Twitter is thataway ->
Score: 2 Votes (Like | Disagree)

I do understand your frustration but when you can order online the second a product goes on sale then receive a week later in the comfort of your own surroundings, I never understand the want to queue outside a shop that has no guarantee they can fulfil your order because stock levels are always unknown and demand is too damn high! Your number 11 in the queue but they only have 10 units for example.

Well, it's not for you to understand, because you're not me. Some people like lima beans. I hate the damned things. But that's what makes us so special. We're all different, and we prefer different things, different experiences. I prefer to buy my products in store; I enjoy waiting with other, emphatic and like-minded people. It's always been half of the fun of getting a new product in hand. Talking to fellow gearheads and nerds. I enjoy connecting with people. It's a whole thing. I'll tell you the same thing I've parotted many times here: just because you don't understand something, doesn't mean you have to challenge it. Whenever you start a statement with, "I never understand the want..." you should always stop right there and ask yourself whether or not what you're about to say afterward is constructive, because generally it's not.

And as for the second part of your statement, see that is exactly the issue. In almost every case before this, waiting for a product on release day was extremely reliable, at least in the sense that when they said they'd be releasing that product in their retail stores, it was actually on the shelf the morning of. Surely if you were at the back of a long line you understood you may not get your hands on one, but that's part of the charm. But those prior launches were handled differently than this one. There was no communication from Apple to either their consumers, or their employees, and their supposed in store release date of May 10th was not honored, at all -- and (beating a dead horse here) they said nothing, to anyone. Maybe you're just missing the very big point here, so I'll spell it out for you more simply. Apple said "Hey come and get it." So we did. But there was nothing to get, and when we asked, "Hey, there's nothing to get, s'like WTF?" They were like "..."

Also, let's not forget the other MAJOR point here. Your assertion that we'd receive orders a week later doesn't hold up either, because there are many STILL waiting for their units to be delivered, well outside their promised delivery window.

Do you have a delivery window though? Surely you expected this small wait? Apple have a small window of initial interest once a product is announced so they will try to get to as many countries as possible. Or should they serve everyone in the USA for 3 months before anyone else gets a chance?

No. I, like many other consumers, purchase my Apple products in store. On the date of release, there was a line of folks waiting in the early AM at my local Apple Store. Several days prior a manager stated (to all of us that called in beforehand, which was the majority of us) we should be at the store prior to opening and they'd have units in store for purchase, and that the folks who were waiting would get their units before any other customers. When Apple disclose that pre-orders will begin online on X date, and will be available in store on Y date, that's what we expect to happen. Yet, the doors opened, and their staff hurriedly dispersed and informed all of us individually that they did not get any units in, nor did any other store in the state. They had no news on when or at which locations to expect them.

And that is the crux of my issue. Apple said nothing publicly, and didn't even keep their staff updated on the status of their inventory (or lack thereof).

And no, I'm not implying that the rest of the world should wait; that's a misrepresentation of what I was actually stating, which is that Apple isn't even meeting the demand here, so how do they expect to meet it elsewhere when supplies are already constrained. If you check Apple.com regularly, the in store date gets pushed back by one more day each and every day. They are now slated for June 28th (when the original date of release was supposedly May 10th). From what I understand, this is the case everywhere, and is consistent across the US.

So if your question really is, what did I expect to happen? I expected for the release to be an actual release, to not have wasted my time and energy, and for them to have, at the very least, communicated that the May 10th release date was not going to happen. It would've been a simple matter of doing a press release and informing retail staff -- as they often do with company-wide communications -- that they would not have any stock available. But nothing.

Of my 40 years on this earth, I've been using Apple products for most of my life. I rely on them for both work and play. I'm an advocate of their technology, and love their products. But as a consumer, I do expect a certain level of responsibility to be taken on the side of the company that's developing and distributing products and services to be open and honest with their customers. While I'm still a fan of Apple products, I'm extremely disappointed with how this particular launch has been handled. And frankly, I have every right to be.
Score: 2 Votes (Like | Disagree)
Read All Comments