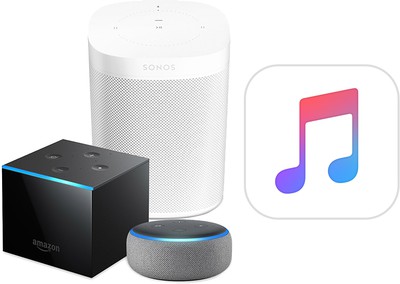 This means ‌Apple Music‌ subscribers who own one of those devices in those countries can now ask Alexa to play songs, artists, playlists, and more from ‌Apple Music‌. This functionality first launched in the United States in December before expanding to the United Kingdom and Ireland last month.

Read our guide on how to set up Apple Music in the Alexa app, including how to make it the default music service so that you don't have to say "on ‌Apple Music‌" each time you ask Alexa to play something.

Peepo
It not in Canada still. Wonder why?
Score: 8 Votes (Like | Disagree)

Rogifan
So you can use Alexa to control Apple Music on these devices but not Siri. #facepalm And all because allowing that would also give Spotify access to Siri?
Score: 5 Votes (Like | Disagree)

Will the Homepod ever work with something thats not Apple Music?

I think the odds are higher that the iPod Classic will work with the Zune Marketplace.
Score: 5 Votes (Like | Disagree)

DevNull0
I can literally buy a pair of Sonos One speakers for the price of a single homepod. Sonos One is like a straight-up superior version of homepod in every way.

And the homepod is useless because I can't use it on my TV (non-Apple TV) and game console. A speaker is simple, plug it in (or pair it) and listen. Does homepod still need an iPhone to do anything useful? Does it still go into a more limited guest mode when the iPhone owner is out of the house?
Score: 5 Votes (Like | Disagree)

magicschoolbus
Will the Homepod ever work with something thats not Apple Music?
Score: 4 Votes (Like | Disagree)

I don’t want multiple voice assistants.. I like the handoff Apple has with its ecosystem.its so confusing why we don’t have a full HomeKit line of products from Apple or a company that Apple has purchased. For me if HomeKit and Siri are not the Major talking points at WWDC I think I may have to consider a Two AI world.
[doublepost=1557945140][/doublepost]

I’m starting to think Apple is hiding something and is using the “Privacy BS” as it’s excuse to why it won’t play nice with others..

Just open up Siri to the competition already. I doubt there’s very many people signing up for Apple Music over Spotify because of Siri integration.
Score: 3 Votes (Like | Disagree)
Read All Comments