Amazon Echo devices have been able to use Alexa-based voice commands to control Apple Music since December, but the feature has been limited to Amazon's own devices until today.

Sonos One and Sonos Beam owners in the United States, United Kingdom, and Ireland are now also able to use Alexa to control ‌Apple Music‌ after adding the ‌Apple Music‌ skill to the Alexa app. 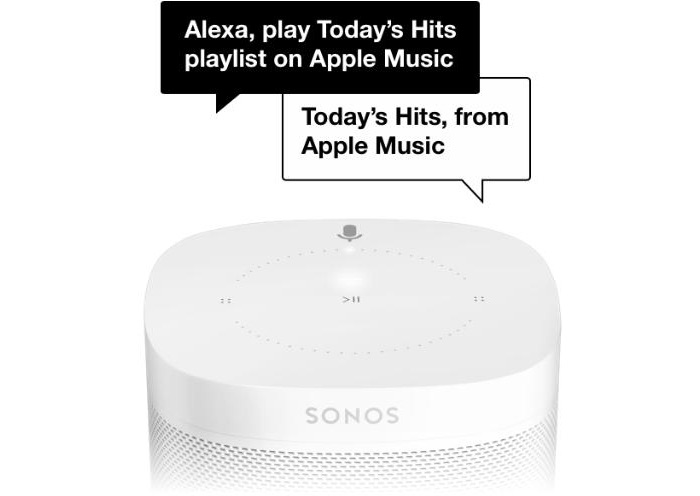 In the US, UK, and Ireland, you can now use your voice to control @AppleMusic through your Sonos One, Beam, or Echo device. Just add the #AppleMusic skill in your Alexa app. pic.twitter.com/2yNius56jo


To get Alexa controls for ‌Apple Music‌ on Sonos, users will need to update to the newest version of the Sonos app, enable the ‌Apple Music‌ skill in the separate Amazon Alexa app, and link an ‌Apple Music‌ account.

It's not yet clear if other Alexa-enabled devices will also be gaining support for ‌Apple Music‌ controls in the future, but right now, the feature is available on all Amazon Echo and Fire TV devices along with the Sonos One and Sonos Beam.

Still waiting in Canada for Apple Music for Alexa...

Still waiting in the Netherlands for HomePod and ApplePay
Rating: 2 Votes

Still waiting in Canada for Apple Music for Alexa...


Yeah, I got mine for Christmas because I thought it would be coming shortly after and there’s still not even an announced release date. I’ve since put it back in the box and have it for sale. If no one buys it I might just give it away since I wasn’t that impressed with it and the only reason I got it was for something it doesn’t do.
Rating: 1 Votes

besler3035
Has anyone gotten user-created playlists to work with this? I'm able to play Favorites, New Music and Chill playlists, but nothing else. It either says it can't be found or it plays an Amazon playlist with a similar name.

robjulo
In my opinion, the only way HomePod would be worthwhile is if it was priced less than the One. The sound is largely equivalent, yet Sonos offers so many offer services and now with Apple Music integrated into Apple Music, I can’t imagine why anyone would pay any premium for a HomePod.

Loucifer
"Alexa while you snoop on my private conversations, make them available to thousands across the world, and allow them to have humorous message boards about how ridiculous I sound, and while you build profiles on me based on my purchases and my Amazon searches, share them with Google via Analytics, and Facebook, because I am sooo friendly I use my Facebook account to sign in to my Amazon account, so both Google and Facebook now know my shopping habits, political views and other preferences, why don't I also tell you what music I listen to? Also I thought I would actually pay money for the surveillance device you have installed in my home, while continuing to buy your products, and enriching Google and Facebook, who now also know what time I get in every day, because you control my light switches, don't you? And you have absolutely no scruples in sharing this information, and I don't mind because I'm so lazy, I'll give you anything rather than actually reading the T&C's.