Apple's totally wireless Powerbeats Pro earphones became available to pre-order May 3 in the United States and Canada, with the first deliveries to customers beginning last Friday. The earphones are initially available in black only, with ivory, moss, and navy colors set to become available this summer. 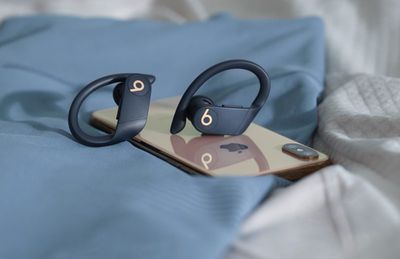 While the black ‌Powerbeats Pro‌ remain listed as "coming soon" on Apple's online store elsewhere, recently updated fine print on the Beats website indicates that the earphones will begin their worldwide rollout later in May and June.

‌Powerbeats Pro‌ will be available to pre-order in black later in May in the United Kingdom, France, and Germany, followed by Australia, Singapore, China, Japan, Hong Kong, Korea, Austria, Italy, Spain, Ireland, The Netherlands, Belgium, Russia, Switzerland, Sweden, Mexico, and Brazil in June, according to the fine print.

As in the United States and Canada, the additional colors will then become available later this summer in most of the other countries listed above, although Apple cautions that color availability is subject to change.

‌Powerbeats Pro‌ shipments are already considerably backlogged, with orders placed today estimated for delivery between June 5 and June 12 in the United States. Only the earliest of customers who pre-ordered have already received their earphones, with many more deliveries set to continue this week.

Like the Powerbeats3, the ‌Powerbeats Pro‌ feature adjustable, secure-fit ear hooks and earbud tips with four size options. They're essentially sportier AirPods, complete with a durable design and sweat resistance. They'll last up to nine hours per charge, with more battery life via an included charging case.

How about get them in actual stores in the US before you start orders in other countries. I did not see anything where this was only going to be a online order launch.

How about no. Other countries matter too.
Score: 3 Votes (Like | Disagree)

The MacBook Pro isn’t used only by ‘professionals’ and the MacBook Air doesn’t fly. It’s just a marketing term.
Score: 3 Votes (Like | Disagree)

Pro seems to indicate (in this context) professional athlete, and not professional audio engineer. A pro athlete might often use and desire a sweat-proof, water-resistant, and secure earbud. It would also be great if it was lightweight, easy to pair/use, and had the highest-end audio quality that could be squeezed in a package that met all the aforementioned requirements.

Not much of May left, so should be any day now....

I'm always amused when someone gets irritated with apparent misuse of the word "Pro". It's just marketing. Did you think wireless earbud/headphones from Beats were going to be for professional use? If you're a professional, you can look at specs to determine if something actually can be used to make money with, i.e. professional use.
Score: 1 Votes (Like | Disagree)

Apple wore out the word Pro (along with many others) a long, long time ago. It's like so many cheap marketing tricks used by companies, such as using the word technology.

It is all Marketing BS. Might as well call it "Magical" and be done with it.
Score: 1 Votes (Like | Disagree)
Read All Comments