Lenovo today unveiled a new foldable ThinkPad, marking the first foldable PC that we've seen. The new foldable PC made its debut at the Lenovo Transform event at the Accelerate conference in Florida.

Lenovo's new device is in the ThinkPad X1 family, but it has no specific name as of yet, nor is work on it finished as of yet. The new PC is not unlike some of the foldable smartphones that we've seen, but in a larger form factor.


The new PC was described as a full performance Intel Windows device with a flexible 13-inch 2K OLED display. It's always on, always connected, and supports a pen. It uses LG Display's foldable screen technology.

The form factor allows it to "transition with you from day to night," with a tablet mode for watching and consuming content, a book mode for reading with the two sides folded in like a book, and a productivity mode that turns it into a laptop with a digital keyboard. It weighs less than two pounds and is about the size of a hardcover book. 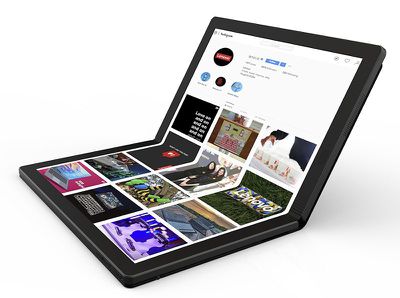 Lenovo says that foldable PC combines laptop productivity with smartphone portability. "This is the only device you'll need in the future to be productive all day long," said a Lenovo executive introducing the device.

At Accelerate, we're unveiling a preview and demo of the world's first foldable PC1. Made for highly mobile, tech-savvy professionals who demand the best tools, the new foldable PC joins the premium ThinkPad X1 family, promising that the unprecedented portability will in no way compromise productivity and reliability. This is not a phone, tablet, or familiar hybrid; this is a full-fledged laptop with a foldable screen.

This space-saving ThinkPad combines laptop productivity with smartphone portability to fold into your lifestyle like never before.

Multiple media sites were able to go hands-on with the foldable PC to give some early first impressions. The Verge said that the screen folds "as advertised" and Windows "worked well enough," but there's still a lot of hardware refinements that need to be implemented.

Engadget says that when the PC was flat on the table, it "didn't have an obvious crease." The hinge was "sturdy" but still easy to open and close, and thanks to the leather exterior, Engadget felt that it resembled a Moleskine notebook when closed. It was comfortable to hold with one hand, and the stylus "felt intuitive."

Lenovo is planning to provide more details on its foldable PC in 2020.

Foldable display technology is in the early stages, and the first foldable smartphone - the Galaxy Fold - has been delayed by Samsung due to multiple review unit failures.

It's not really clear if Apple is seriously considering foldable display technology at this point in time, but the company has registered patents and there have been a few rumors, including one suggesting Apple would work with LG Display, the same company supplying displays to Lenovo for the new foldable PC.

keysofanxiety
Another engineering exercise that we’ll look back at and shake our heads.

To paraphrase Jobs: you need to look at the user experience and work backwards, rather than seeing what new technology you have and try to shoehorn it into a product.
Score: 31 Votes (Like | Disagree)

farewelwilliams
have fun hovering your fingers over the virtual keyboard for 10 hours
Score: 13 Votes (Like | Disagree)

kriebe
I respect the technology and innovation, but nobody wants this. Especially for the price this thing will be.

Please keep innovating and pushing us forward, but use the tech for something useful.
[doublepost=1557789928][/doublepost]And nobody wants a digital keyboard on a laptop...
Score: 10 Votes (Like | Disagree)