At least one of the iPhones coming in 2019 will feature a triple-lens camera arrangement, and while Apple experimented with multiple layouts, recent information suggests the company will adopt a square-shaped camera bump with three lenses arranged in a triangle shape.

While this design has been shown off previously in renders, OnLeaks' Steve Hemmerstoffer has teamed up with Indian site Cashkaro to share new renders and new information about the iPhones coming this September.


As seen in earlier leaks, these new renders have a wide square-shaped camera bump at the rear with two lenses on the left and a single lens and flash to the right, positioning the three lenses into a triangle.

The renders feature the "iPhone XI," aka the successor to the 5.8-inch ‌iPhone‌ XS. Some sites have been referring to this 2019 device as the ‌iPhone‌ XI or iPhone 11, but we don't have any insight into Apple's naming plans at this time. 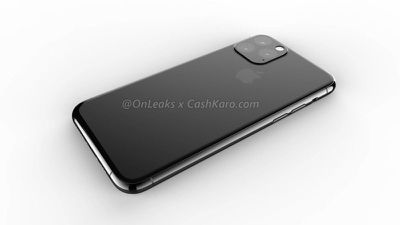 According to the site sharing Hemmerstoffer's info, the next-generation ‌iPhone‌ XS continues to feature a 5.8-inch display, but with an "almost indistinguishable" reduction in the thickness of the notch and bezels. The device allegedly measures in at 143.9mm by 71.4mm by 7.8mm, which is quite similar to the size of the current ‌iPhone‌ XS: 143.6mm by 70.9mm by 7.7mm.

The upcoming smartphone is said to feature a "new and unique" rear panel that is made from a single piece of glass that includes the camera bump, a design that could minimize the obtrusiveness of the large rear camera.

The rear microphone is said to be in a different place than it was in earlier leaks (at the bottom of the camera bump) and the ‌iPhone‌ is allegedly going to have a "differently shaped mute button" similar to the mute button on older iPads.

Recent rumors have indicated that both the 5.8 and 6.5-inch OLED iPhones coming in 2019 will use triple-lens camera arrangements, despite earlier rumors suggesting this feature would be limited to the 6.5-inch model.

The 6.1-inch ‌iPhone‌ XR followup that will be sold alongside the two OLED devices is believed to have a dual-lens camera rather than a triple-lens setup, which is still an upgrade over the single-lens camera in the current ‌iPhone‌ XR.

2019 iPhones are also rumored to include Lightning ports, a new bilateral wireless charging feature that will let them wirelessly charge other devices like AirPods, 12-megapixel front-facing cameras, and faster A13 chips. With the exception of the camera design, no other design or display changes are expected.

bpeeps
Everyone is going to call this ugly and buy it anyway. Just like you did with the iPhone 5's ugly glass panels, the iPhone 6's ugly antenna lines, and the iPhone X's ugly notch.
Score: 30 Votes (Like | Disagree)

AngerDanger
I remember when we were young, innocent, and complaining about the iPhone 6's camera bump… :(

That's about 2-3mm there, which'd be about 30% thicker over all, that's going to feel hideous compared to now. No thanks.
Score: 10 Votes (Like | Disagree)
Read All Comments