Kuo: Two New AirPods Models Likely in Late 2019 to Early 2020, Including One With 'All-New Design'

Apple will likely launch two new AirPods models as early as the fourth quarter of 2019, according to analyst Ming-Chi Kuo. 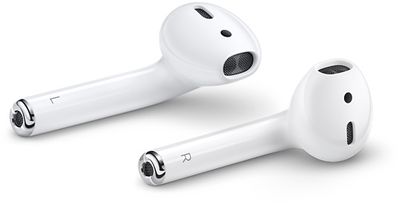 In his latest research note, obtained by MacRumors, Kuo forecasts that two new AirPods models will likely go into mass production between the fourth quarter of 2019 and the first quarter of 2020, with Luxshare, Goertek, and Amkor expected to be Apple's primary suppliers of the new earphones.

Kuo believes one of the new AirPods models will feature an "all-new form factor design" and a "higher price" than the second-generation AirPods, which cost $159 with a standard charging case and $199 with a wireless charging case. The other model is expected to be a more iterative update with the same pricing.

Both new AirPods models are said to adopt a new system-in-package design internally, which can improve assembly yield rates, save space internally, and reduce costs, but Kuo does not elaborate on outward-facing design changes.

We expect Apple will likely launch two new AirPods models in 4Q19 at the earliest. One is the all-new form factor design at a higher price. The other's outlook and price will be the same as the current model's. A common internal design factor of these two new AirPods will be to abandon the current "SMT+RFPCB" design and change to adopt the SiP design instead for improving assembly yield rates, saving internal space and reducing cost.

Kuo is "positive on the demand for AirPods" and Apple's wireless headphones market share, as he believes the "all-new design" of one of the new models "could boost the replacement demand and attract new users." He estimates AirPods shipments will reach 52 million units in 2019 and 75-85 million units in 2020.

Bloomberg's Mark Gurman was first to reveal Apple's roadmap for AirPods, including the second-generation pair with "Hey ‌Siri‌" support, while DigiTimes also expects third-generation AirPods to launch by the end of the year.

H.E. Pennypacker
How about creating an air pod that fits people’s ears? That would be a step in the right direction.
Score: 26 Votes (Like | Disagree)

How about creating an air pod that fits people’s ears? That would be a step in the right direction.

They fit my ears perfectly
Score: 24 Votes (Like | Disagree)

Fantastic. Their best accompaniment to the iPhone gets significantly better. Looks like I’ll be upgrading next year.

But I have no idea what SMT+RFPCB & SiP are.

Surface mount technology/Rigid Flexible Printed Circuit Board currently, moving to System in Package. They’re currently using a small printed circuit board with various components soldered to it; because of space constraints part of the board is flexible. They use this in the iPhone as well.

The new design is integrated into one package, it’s more dense and there are ways to mount some components vertically, attached by thin wires instead of being soldered to a flat surface. It’s not fabricated as a single chip like the A-series SoC in iPhones; there are still various discrete analog and digital components including passive devices, but they’re mounted on a single substrate and it’s all housed in the same package so it looks similar. The Apple Watch has used a SiP since its introduction four years ago.
Score: 12 Votes (Like | Disagree)

They fit my ears perfectly

If only everyone in the world had your same exact ears :rolleyes:
Score: 12 Votes (Like | Disagree)

Mad Mac Maniac
So it took 2.5 years to update them the first time, and now <1 year before they are updated again? As if we needed another reason to believe that these 2nd gen AirPods were 100% supposed to release with the XS last fall. Seems like they just waited 6 months for AirPower.
Score: 11 Votes (Like | Disagree)

They fit my ears perfectly

They fit >85% of the population’s ears fine.

With the outer-design, it was always going to be difficult to have it fit 100% of people’s ears.

New design based on Apple's In-Ear Headphones would make sense for a noise cancellation version. That would not be a bad thing at all.

Yeah, the only issue could be comfort after wearing them for a while - the current design are great in that they don’t place any pressure on the inside of your ear, so they can be worn just about all day.
Score: 9 Votes (Like | Disagree)
Read All Comments