PSA: Make Sure to Cancel Apple News+ If You Signed Up for a Free Trial After Apple's March 25 Event and Don't Want to be Charged

Tomorrow marks a month since Apple announced its Apple News+ subscription service, which means if you signed up on March 25 following the event, you're going to start getting charged $9.99 per month. 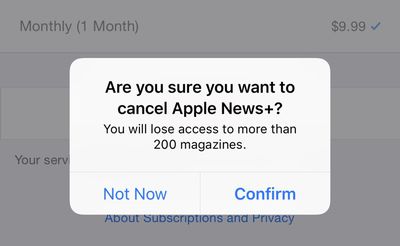 If you're not happy with Apple News+ and want to avoid the fee, make sure to cancel today. Here's how:

Once you've canceled ‌Apple News‌+, the free trial ends immediately and you won't be charged. If you don't cancel, your subscription will renew at $9.99 per month going forward. After canceling, you can opt to resubscribe, and you'll be charged $9.99 right away.

An estimated 200,000 people signed up for ‌Apple News‌+ during the first 48 hours after the service launched, which is more users than Texture had at its peak, but it's not clear how many subscribers will continue to use the service now that free trials are beginning to end.

Subscribe to the MacRumors YouTube channel for more videos.
‌Apple News‌+ has been criticized for its confusing layout, lack of clear controls for managing and accessing magazines, poor customization and recommendations, inability to delete downloaded magazines, outdated PDF interface for some magazines, and nearly unreadable content on ‌iPhone‌ and Mac for magazines that aren't digitally optimized.

As for news, what many people may be subscribing for, it's also a bit limited. You can access all of the content from The Wall Street Journal, for example, but Apple is only highlighting a selection of general interest news stories, and to find anything else, you have to search. ‌Apple News‌+ also only retains three days of archived content.

Aside from The Los Angeles Times and The Wall Street Journal, no other newspapers, such as The New York Times and The Washington Post, have agreed to join ‌Apple News‌+, making it of limited interest to those who don't read magazines. Newspapers have refused to join because Apple takes 50 percent of the revenue from an ‌Apple News‌+ subscription, splitting the rest between publishers based on how much time is spent on their content.

Canceled my Apple News+ trial before they started charging me tomorrow. Not enough content of interest to me, and the whole user experience is just mind-bogglingly bad. Here’s hoping they get it figured out at some point. — Eric Slivka (@eslivka) April 24, 2019

Former Texture users have also expressed displeasure with ‌Apple News‌+ because the interface is not as streamlined or as easy to use as Texture, there's no Android app, and there's a limited collection of back issues. Texture is shutting down at the end of May.

So sad to report I will cancel my Apple News+ subscription after the trial period. It's just not nearly as good as Texture. Why would I want to read an excerpted version of the New Yorker? I've always been a huge Apple fan (duh), but this product is a stinker. (Nav stinks, too.) — Eric Suesz (@supereric) April 22, 2019

There are customers who enjoy magazines and those who are subscribers to The Wall Street Journal who are satisfied with the experience, but for many, Apple needs to make improvements to make ‌Apple News‌+ feel more finished, less confusing, and more polished.
Tag: Apple News Guide
[ 100 comments ]

yaxomoxay
Thanks for the reminder, however I already canceled. The service sucks.
(most libraries have a similar service for free btw)
Score: 22 Votes (Like | Disagree)

macduke
I like how matter of fact the title for this story is: "PSA: Make Sure to Cancel Apple News+ If You Signed Up for a Free Trial After Apple's March 25 Event"

It's not really a very good service.

I have a feeling that Apple TV+ is going to be similar. I'm not sure how you can possibly launch a streaming service with only a handful of shows and actually charge people monthly for such little content—especially when you're talking about different genres and people might only be interested in one or two shows—and you're going to tell me that they're all going to be must-see hits? If they're lucky they'll have a hit or two out of the whole bunch. At least with other streaming services you get access to a large backlog of older content, as well as other content from various sources. I'm not sure if Apple fully understands what makes a good service. Just look at iCloud storage—it still can't do most of the things you can do in Dropbox.
Score: 21 Votes (Like | Disagree)

For every "free" trial, it is always safer to cancel the subscription immediately after subscribing. It's not logical, but it's the only way to be sure not to forget the "free" trap at the end of the trial period.

Thing is, Apple changed this. The moment you cancel the subscription, the trial ends. I realised this last week when a friend was telling me he set up a reminder to cancel Apple Music. I told him what you just wrote but he showed me the new policy Apple implemented. Now, we all need to cancel the day before the trial ends instead of doing it immediately after subscribing.
Score: 15 Votes (Like | Disagree)

Fozziebear71
I never signed up for the trial because as I stated when they announced the service, why would someone want to pay for "news" in this current climate in our society? You can get plenty of "news" for free these days. I'm not gonna PAY for "news" that only gives me the agenda that the "news" source wants me to believe. I suspect the TV service will be the same sort of "entertainment".
Score: 14 Votes (Like | Disagree)

DNichter
Cancelled the next day. Not for me.
Score: 12 Votes (Like | Disagree)

For every "free" trial, it is always safer to cancel the subscription immediately after subscribing. It's not logical, but it's the only way to be sure not to forget the "free" trap at the end of the trial period. A reminder by Apple that the trial period is over before charging any fee would be honest, even if the standard is NOT to send any reminder.

I believe that cancelling during the free trial turns off access immediately.
Score: 7 Votes (Like | Disagree)
Read All Comments