Over 200,000 People Subscribed to Apple News+ in First 48 Hours After Launch

The number comes from two unnamed sources who provided the figures to The New York Times and asked not to be named. 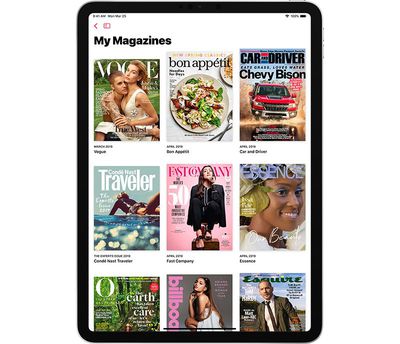 That's more than Texture, the service ‌Apple News‌+ was based on, had during its peak. Apple purchased Texture in 2018 and is shutting it down at the end of May now that ‌Apple News‌+ has launched.

‌Apple News‌+ provides access to more than 200 magazines as well as paywalled news from The Wall Street Journal, The Los Angeles Times, and a few other news publications.

Apple is going to be charging $9.99 per month for ‌Apple News‌+, but those who subscribed following the event have a 30-day free trial. There are still more than three weeks before customers will be charged, and many may be planning to cancel ahead of when the trial expires.

It's still not clear how popular ‌Apple News‌+ will be once that trial period runs out, but many magazines are hoping for the best. Pamela Wassserstein, CEO of New York Media, said that she felt ‌Apple News‌+ would allow New York magazine, The Cut, and Vulture to reach a "new audience" in an environment that "feels right."

Apple takes 50 percent of the subscription price from ‌Apple News‌+, and will be providing the rest to its publishing partners. Media companies will receive an amount based on the amount of time readers are devoting to their content.

This revenue split has been controversial and while many magazines have signed up because Texture worked in a similar way, Apple has been unable to woo major newspapers like The New York Times and The Washington Post.

nojkepop
Subscribed to a trial.
Score: 46 Votes (Like | Disagree)

tgwaste
Thats cause its free.. Soon as my trial is up im out, its useless.
Score: 33 Votes (Like | Disagree)

While it lacks the kind of polish I’d expect from Apple, the value is undeniable and it’s already become a part of my routine. Rather than browse for news on multiple sites, I pull up Apple News periodically and see what’s new from all my favourite sources in that one spot. The notifications on my Apple Watch are pretty great too.

I’ve also spent a lot time browsing through magazines like I would a paper mag, page by page, appreciating the graphic layout and even the ads (magazine advertising is truly an art form). I really think that Apple has a chance to revolutionize how we consume digital “print” publishing.

The app needs some work, however. Apple News+ feels bolted on, disconnected from the rest of the app. Certain important features are missing like saving a magazine article to read later like can be done in articles elsewhere in the app. There are also a bunch of bugs with downloaded magazines disappearing and not showing in “My Magazines” unless I actually start reading it.
Score: 23 Votes (Like | Disagree)

atikalz
For a free trial not really impressing. And from this userbase lets see how many will use it after the 30-day-trail for real money. My guess: Not many. This outdated product and the boring apple TV+ will be a fail for apple. At least granny Cook had some amazing fun at the press conference in his newsstand.
Score: 21 Votes (Like | Disagree)

How is access to 300 magazines for $10pm ‘useless’? It might not be well suited to you, but I can’t fathom how you consider it useless?

For the same reason I cut cable TV with 150 USELESS channels.
Score: 19 Votes (Like | Disagree)

ryanasimov
Just how many of those 200,000 choose to pay after the free trial ends is what actually counts, though. Apple is counting on a certain percentage to forget to cancel, so the number of paying customers won't be known for a while yet.
Score: 15 Votes (Like | Disagree)
Read All Comments