Apple News+: Is it Worth the $9.99 per Month Subscription Price?

Apple in late March unveiled its new Apple News+ service, which is designed to let ‌Apple News‌ users access over 200 magazines and some paywalled news content for a $9.99 per month fee.

We've been using ‌Apple News‌+ over the course of the last week and a half and in our latest YouTube video, we explore whether the service is worth the $9.99 monthly cost.

Subscribe to the MacRumors YouTube channel for more videos.
‌Apple News‌+ primarily focuses on magazines, and there are right around 240 to choose from right now. There are major titles like National Geographic and The New Yorker, along with many smaller specialty magazines. The subscription fee also includes access to some paywalled news content from sites like The Wall Street Journal and The Los Angeles Times, though as we'll explain, there are some caveats. 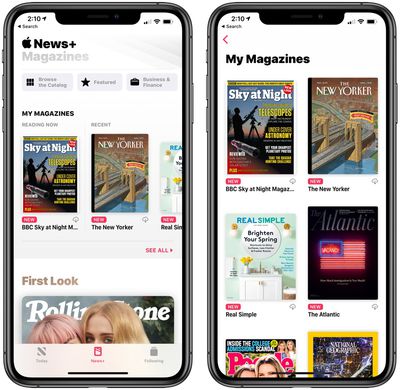 The user interface looks simple enough, but there are some quirks that have been confusing new subscribers. There's no clear way to add a new magazine to the My Magazines list, and in fact, you have to search for the title of the magazine in the standard ‌Apple News‌ interface and "favorite" it with a heart to get it to show up reliably in My Magazines or tap the title to get taken to an overview page, neither of which is intuitive.

To further confuse things, some magazines that you've read but haven't favorited will temporarily be displayed in My Magazines, and there are no options anywhere to control what shows up there, nor to customize content recommendations to make them more relevant to one's interests.

When it comes to the magazines themselves, newly released magazine issues from major companies have a digital-focused interface that lets you scroll through a list of stories to get to what you want to read, but for back issues and lesser known magazines, content is presented in a PDF format that's less than ideal.

PDFs look all right on iPad, but are difficult to read on iPhone, and the Mac interface for ‌Apple News‌+ is no better. The single page spread on Mac features small text that's not easy to zoom into, making reading PDF-based magazines on most devices a less than stellar experience.

Other major newspapers like The New York Times and The Washington Post have refused to join Apple News+, and it's not clear if these publications will change their position.

‌Apple News‌+ is likely to improve in the future with interface updates and as more magazines adopt the customized digital-forward design, but right now, the service feels sloppy, unfinished, and confusing.

It's also not clear if it's something that will interest the general public given the heavy focus on magazines and the lack of subscription-based news that's available. Apple's prior magazine effort, Apple Newsstand, was ultimately unsuccessful. Unlimited access to magazine content might lure more readers, but whether this new venture will succeed remains to be seen.

‌Apple News‌+ had more than 200,000 subscribers following its March introduction, but all of those accounts are still on the one-month free trial that's available and are not yet paying customers.

Have you signed up for ‌Apple News‌+ and do you plan to keep the subscription? Let us know in the comments, and if you have questions about ‌Apple News‌+, make sure to check out our Apple News+ guide.

Things like these aren’t limited to News+ or Apple in general; there seems to be this annoying-as-**** trend of automation/curation or personalized recommendations that make a UI really difficult for the end user.

It’s hard to anticipate what will show up where, for how long, how to get rid of something, and how to add something in the first place.

Yes. And what frustrates me is that the automatic recommendations are SO OFF. Mine's recommending content on cooking with kids (do not care), sports (care even less), family activities (have no kids), stylish doggy poop bags (do not have a dog), and the woman who styled Justin Bieber (does anyone care???).
Score: 59 Votes (Like | Disagree)

iapplelove
Not worth it for me, I don’t even use the free Apple news app. But that’s just me.
Score: 39 Votes (Like | Disagree)

Drudge Report is free and provides all of the news I need.
Score: 28 Votes (Like | Disagree)

thadoggfather
It's going to be a catastrophic failure. Calling it now. Quote me down the road if you'd like.

All this 'curation' and yet the end result is the same as scraping news sites without discernment and regurgitating the content in a scattered UI... I don't feel like they've filtered out the crap which was the supposed original intention/sales pitch of 'curation' in the first place -- they've only enhanced it.

Apple should really stick with hardware.

Services have never been their strength and I dont see this changing that.
Score: 26 Votes (Like | Disagree)

Aston441
I go out of my way to avoid any news except hardware tech news.

You'd have to pay ME to read it. And I'd charge a hell is a lot more then $10 a month to sludge through the garbage propaganda that masquerades as reporting these days.
Score: 25 Votes (Like | Disagree)

bbplayer5
Just google the title to every story, and POOF, all of the stories for free.
Score: 24 Votes (Like | Disagree)
Read All Comments