Toyota this week announced that CarPlay and Android Auto will be standard features in its all-new 2020 Yaris Hatchback in the United States. 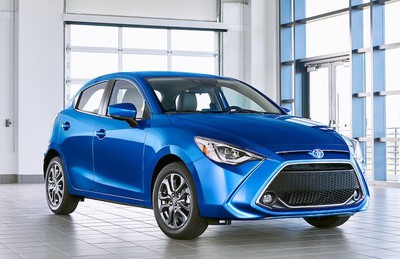 The subcompact vehicle is equipped with a seven-inch touchscreen display protruding above the dashboard, complete with ‌CarPlay‌, Android Auto, Bluetooth, and SiriusXM. As in other Toyota vehicles, ‌CarPlay‌ remains a wired implementation, with two USB ports for connecting an iPhone to the system with a Lightning cable.

Toyota was a longtime CarPlay holdout, but it now offers Apple's platform in the 2019 and later Avalon, Camry, Corolla Hatchback, C-HR, RAV4, and Sienna as well as the 2020 Corolla, Tacoma, Tundra, Sequoia, 4Runner, Supra, and now the Yaris Hatchback. Toyota has yet to add ‌CarPlay‌ to the Yaris sedan.

‌CarPlay‌ provides convenient access to frequently used ‌iPhone‌ apps such as Phone, Messages, Apple Maps, Google Maps, Waze, Apple Music, and Spotify directly from the dashboard. The platform was introduced in 2014 and is now offered in over 500 vehicle models in the United States, according to Apple.

The new Yaris Hatchback is essentially a rebadged Mazda2, in line with the Yaris sedan. Pricing and availability have yet to be disclosed.