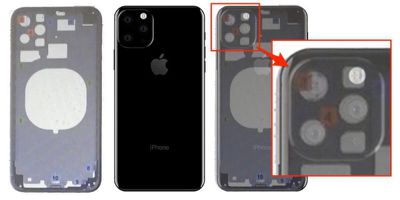 The shared picture, above, depicts handset chassis schematics newly posted to Slashleaks alongside Hemmerstoffer's earlier CAD rendering of an ‌iPhone‌, all with a large patch on the rear of the device that appears to house three lenses.

Hemmerstoffer says the chassis leak supports his claim that at least one version of the next ‌iPhone‌ will feature a rear triple-lens camera system in a triangular configuration, based on information he has sourced previously.

Rumors about triple lenses in an ‌iPhone‌ began as far back as May 2018, while well-known Apple analyst Ming-Chi Kuo said the same thing in October.

In January, Hemmerstoffer released renderings of the supposed ‌iPhone‌ 2019 model, with a similar unusual-looking patch on the rear for three lenses, a flash, and a mic.

A few days later, The Wall Street Journal reported that Apple is planning on introducing a triple-lens camera system in at least one of the iPhones coming in 2019, while Bloomberg seemingly confirmed the rumor later the same month.

@OnLeaks rendering released in January of alleged triple-lens 2019 ‌iPhone‌ prototype
Based on the two reports, the second-generation ‌iPhone‌ XS Max will feature a three-lens camera, while the successors to the ‌iPhone‌ XS and ‌iPhone‌ XR will continue to use dual-lens cameras. However, neither report mentioned how the lenses would be arranged on the rear of the case, and other rumors have suggested Apple is planning to use a horizontal triple-lens camera layout.

At any rate, a triple-lens rear camera would allow for a larger field of view, a wider zoom range, improved low light performance, and it would capture more pixels. Hemmerstoffer has previously claimed that one rear camera will be 10 megapixels, while a second will come in at 14 megapixels. The details of the third sensor are apparently unknown.

According to Bloomberg, Apple is also working on a feature that would use the extra pixel data afforded by three lenses to provide tools for automatically repairing a photo or a video to fit in a subject that "may have accidentally been cut off from the initial shot."

Early rumors suggested Apple would introduce 3D depth sensing technology for the rear-facing camera, but those plans are believed to have been delayed until 2020.

BulkSlash
I'm not normally one to complain about the shape and size of camera bumps, but that is seriously hideous.
Score: 64 Votes (Like | Disagree)

KooL BeAnZ
That’s got to be the next step in the ugly trend of bump, pill and square.

jimothyGator
I know it’s a cliché, but this sort of thing would never happen if Steve Jobs we’re still around. Sometimes, what a product team needs is someone to say, “this is sh*t! Go back to work and give me something that doesn’t suck!”

Would I still buy an iPhone like this? Probably. Would I get over the ugly bump eventually? Probably. But Apple could benefit from some harsh, but constructive, internal criticism.
Score: 48 Votes (Like | Disagree)

decsramble
If they made the whole case a millimeter thicker and filled that extra space with battery it would look a nicer and give great battery life. But they wont.
Score: 34 Votes (Like | Disagree)

Motawa
this looks so stupid
Score: 26 Votes (Like | Disagree)
Read All Comments