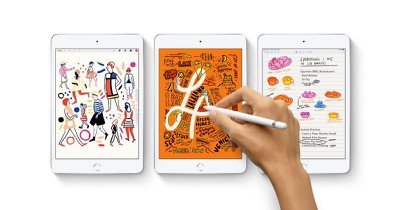 Apple says that with the new A12 Bionic chip, the ‌iPad mini‌ now delivers three times the performance and nine times faster graphics. Meanwhile the advanced Retina display with True Tone technology and wide color support is 25 percent brighter and has the highest pixel density (3 million) of any iPad.

Elsewhere, an 8-megapixel rear camera brings improved low-light performance and HD video recording, while the front facing camera has been bumped up to 7 megapixels for better-quality selfies and FaceTime HD.

"iPad continues to provide magical new experiences for a growing range of uses where it is the absolute best device, from playing games in augmented reality to note-taking and drawing with Apple Pencil, from streaming HD movies and editing 4K films to learning to develop apps with Swift Playgrounds," said Phil Schiller, Apple's senior vice president of Worldwide Marketing. "Today the iPad family takes two big leaps forward with an all-new 10.5-inch iPad Air that brings high-end size, features and performance at a breakthrough price, and a major upgrade to the 7.9-inch iPad mini, which also brings Apple Pencil, Retina display and the A12 Bionic chip to the many customers that love its compact size."

Available in Silver, Space Gray, and Gold, and in 64 and 256GB storage capacities, the new ‌iPad mini‌ starts at $399 for the Wi-Fi model and $529 for the Wi-Fi + Cellular model. An ‌Apple Pencil‌ (1st generation) is available for purchase separately for $99. Online orders for the new ‌iPad mini‌ begin today on the Apple website, with availability in Apple stores and select resellers starting next week.

The ‌iPad mini‌ 4 has been discontinued.

ipedro
But why the Apple Pencil 1? Having 2 different pencils that only work with certain iPads is bound to cause confusion.

Apple should be phasing all iPads to the new Pencil 2, not introducing brand new iPads that work exclusively with the older pencil.
Score: 63 Votes (Like | Disagree)

Yeah crazy that they would increase the screen and power and all the other upgrades but not increase the price. Thank goodness.
Score: 57 Votes (Like | Disagree)

Relentless Power
Awesome they revived the mini . And they listened and added Apple Pencil support as well.
Score: 47 Votes (Like | Disagree)

gnipgnop
A12 Bionic, 4x the base storage, much better display quality, Apple Pencil support...but people are complaining that the price is the same as 2015? That's bad even for MacRumors.
Score: 43 Votes (Like | Disagree)

StellarVixen
A12 and same price tag? Well, it's rare for Apple to be this generous...
Score: 33 Votes (Like | Disagree)
Read All Comments

Monday July 26, 2021 4:53 pm PDT by Juli Clover
During a Tesla earnings call that took place today, Tesla CEO Elon Musk spent time sniping at Apple, reports CNBC. Musk criticized Apple's "walled garden" and made comments on the company's cobalt use. In a discussion about plans to allow Tesla competitors to use the Tesla electric vehicle charger network, Musk said that Tesla does not want to create a walled garden to "bludgeon" Tesla...
Read Full Article • 327 comments