In a meeting of the Workforce Policy Advisory Board yesterday, U.S. President Donald Trump mistakenly referred to Apple CEO Tim Cook as "Tim Apple" in a flub that quickly spread around the internet.

Cook today joined in on the fun and changed his name on Twitter from ‌Tim Cook‌ to "Tim ," referencing Trump's mistake. 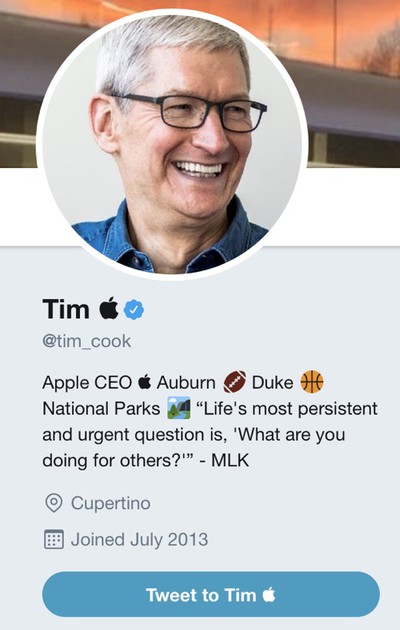 During yesterday's meeting, Cook was sitting right next to Trump when Trump referred to him as Tim Apple and he managed to keep a straight face at the time.

"We're going to be opening up the labor forces because we have to. We have so many companies coming in. People like Tim - you're expanding all over and doing things that I really wanted you to do from the beginning. You used to say, 'Tim, you gotta start doing it here,' and you have really put a big investment in our country. We appreciate it very much, Tim Apple."

Cook was at the meeting because he's a member of the Workforce Policy Advisory Board. The board was put together to make recommendations on policies to "to develop and implement a strategy to revamp the American workforce to better meet the challenges of the 21st century."

Tim Crook would have been more appropriate

Please take this free advice: if your comment makes it to [USER=256215]@AngerDanger[/USER]'s bingo card, you're really not original and need to think of some new material.

gugy
Yep, this is what we have in the White House.
Score: 71 Votes (Like | Disagree)

keysofanxiety
Everybody here is laughing, but we're overlooking the fact that Bill Microsoft wasn't invited to this advisory board, and I think that's a real shame.
Score: 59 Votes (Like | Disagree)

As I pointed out elsewhere on PRSI it's not uncommon for presidents (or any human being) to make mistakes like this one. It just happens.

But ... the pattern of such gaffs is disturbing.
Score: 57 Votes (Like | Disagree)