Sony today released a new app called "Remote Play" for iOS devices, after launching the same app on Android a few years ago. The app allows you to connect your iPhone or iPad to your PS4, and directly control both the console interface as well as most games through on-screen iOS touch controls [Direct Link]. 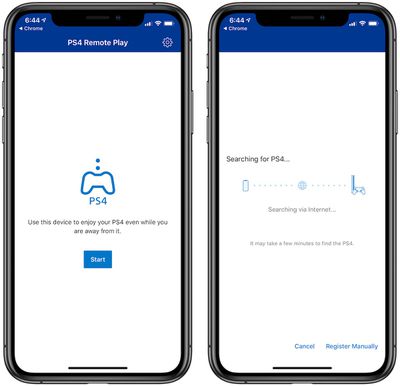 To get everything set up, make sure your PS4 is updated to version 6.50 (which just began rolling out in the early hours of the morning). Then, download the PS4 Remote Play app from the iOS App Store, sign into your Sony account in the app, and allow it to search for your PS4. You'll need to be on a Wi-Fi network for this to work, as the app cannot be used via mobile networks.

Once connected, you'll see your PS4 home screen displayed on your ‌iPhone‌, sitting above a row of touch controls that mimic the buttons on a DualShock 4 controller. If you tilt the ‌iPhone‌ to a horizontal orientation, the buttons will disappear until you tap on the display.

The app supports the ability to talk to your friends in a party or through game chat, but you'll have to allow it access to the iOS microphone. The app's controls include the DualShock 4's Share and Options buttons, as well as the central PlayStation logo that brings you back to the home screen.

You can browse around the PS4 and launch most games in the Remote Play app, but Sony does note that there are some games that will be incompatible with the app. Additionally, you can't directly connect the DualShock 4 to the ‌iPhone‌ to play games.

Sony has shown interest in iOS in the past, previously launching an app called "PlayLink", which enabled synchronous multiplayer gaming between the PS4 and iOS device. PlayLink games relied on the PS4, however, and iOS devices acted as extensions to the main events happening on the TV, including experiences like a mini-game collection, comedy quiz show, and hidden identity game.

Jeaz
It would be great if Apple to relax their MFI requirements here a bit and allow the DualShock to work with iOS. Would be to everyone's benefit.

With that said, Sony could also find a way to make MFI controllers work. I know it has fewer buttons but in worst case add the missing buttons to the screen.
Score: 14 Votes (Like | Disagree)

ccrunner_tj
Just when I thought my Widowmaker aim couldn't get any worse...
Score: 5 Votes (Like | Disagree)

Plutonius
Wouldn't using an actual PS4 controller be superior to trying to use the iPhone as a controller ?

Is this another case of someone doing something to prove a concept rather than designing it for an actual need ?
Score: 4 Votes (Like | Disagree)

deebinem
Wow, I cannot think of a worse way to play a PS4.

EDIT: Let me clarify; I am not saying remotely accessing your PS4 on your phone is terrible, that's actually pretty effing awesome. Comparing a touchscreen device to the multi-buttoned, muscle memory ingrained comfort of a Dual Shock?

Now this becomes a pretty amazing thing and something I am happy to eat crow over!
Score: 4 Votes (Like | Disagree)

Wow, I cannot think of a worse way to play a PS4.

What if the TV is hogged by your spouse? It's the same appeal what made the Switch great.
Score: 3 Votes (Like | Disagree)

I'd rather kill myself than play PS4 games with virtual touchscreen controls on a phone. Surely there can be some way to solve this?
Score: 3 Votes (Like | Disagree)
Read All Comments

Friday December 2, 2022 10:54 am PST by Juli Clover
Google is continuing on with its attempt to convince Apple to adopt the RCS messaging standard, publishing a new "it's time for RCS" blog post. Promoted heavily by Google, RCS or Rich Communication Services is a messaging standard that is designed to replace the current SMS messaging standard. It provides support for higher resolution photos and videos, audio messages, and bigger file sizes, ...
Read Full Article • 669 comments