Apple Watch bands have been refreshed on a seasonal basis for the past few years, and it looks like that trend will continue in spring 2019, as many of the current fall 2018 bands are now out of stock on Apple's online store. 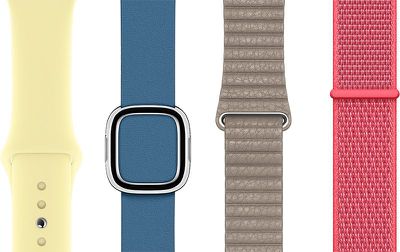 Apple could unveil its spring 2019 bands in a press release on March 21, the first day of spring, as it did last year. Apple is also expected to host a March 25 event, but little to no hardware is expected. Either way, we're likely a few weeks away from new bands if another refresh is planned.

Apple likes to brighten up its Apple Watch bands in the spring, although not quite as much as its vibrant summer bands. Spring 2018 colors included Lemonade, Red Raspberry, Denim Blue, Soft Pink, Spring Yellow, and others. Most bands range between $49 and $149 in price, with Hermès bands costing up to $539.

All bands released to date have been compatible with every Apple Watch generation.

AngerDanger
For those of you playing along at home, please mark off “New Watch Bands.”

why would anyone buy a watch band from apple? Third parties make way cooler bands that work just as well and are a fraction of the cost

Cause the 3rd party ones are complete and total junk
Score: 19 Votes (Like | Disagree)

Rychiar
why would anyone buy a watch band from apple? Third parties make way cooler bands that work just as well and are a fraction of the cost
Score: 13 Votes (Like | Disagree)

Roscorito
It’s good the Mac Pro isn’t 6 years overdue or this kind of news would make me mad...
Score: 12 Votes (Like | Disagree)

why would anyone buy a watch band from apple? Third parties make way cooler bands that work just as well and are a fraction of the cost

The 3rd party ones are good, but Apple's are on another level for quality. Whether Apple's are worth ten times the cost is subjective.
Score: 11 Votes (Like | Disagree)

For those of you playing along at home, please mark off “watch bands.”

Friday August 12, 2022 12:46 pm PDT by Juli Clover
Samsung this week launched its fourth-generation foldable devices, the $1,000 Galaxy Z Flip and the $1,800 Galaxy Z Fold. Though there's no sign of a comparable Apple foldable device on the horizon, rumors suggest prototypes are in the works, so we thought we'd take a look at Samsung's newest smartphones to see what Apple needs to measure up to when a foldable iPhone does come out. Subscribe ...
Read Full Article • 287 comments