Thursday February 28, 2019 2:21 pm PST by Juli Clover
Apple discontinued the iPhone SE in September when iPhone XS and XR models were released, but in January, Apple started selling off its remaining stock via its clearance site for $249.

Every time Apple restocks the clearance site, available ‌iPhone‌ SE models go quick, suggesting there's still quite a lot of interest in the 4-inch device. We recently picked up an ‌iPhone‌ SE to see just what it's like using one in 2019.

On the plus side, it's so small and light that it's easy to use one handed, something you can't necessarily do with Apple's biggest iPhones. With its aluminum backing, the ‌iPhone‌ SE is more durable than Apple's new all-glass smartphones.

The ‌iPhone‌ SE pre-dates Face ID, of course, so it's using a Touch ID Home button, which is great for those who continue to prefer fingerprint sensors to facial recognition.

There's also a headphone jack, which has been eliminated from all current iPhones (and the most recent iPad Pro models), and it has separate volume up and down buttons along with a power button at the top of the device instead of a side button. 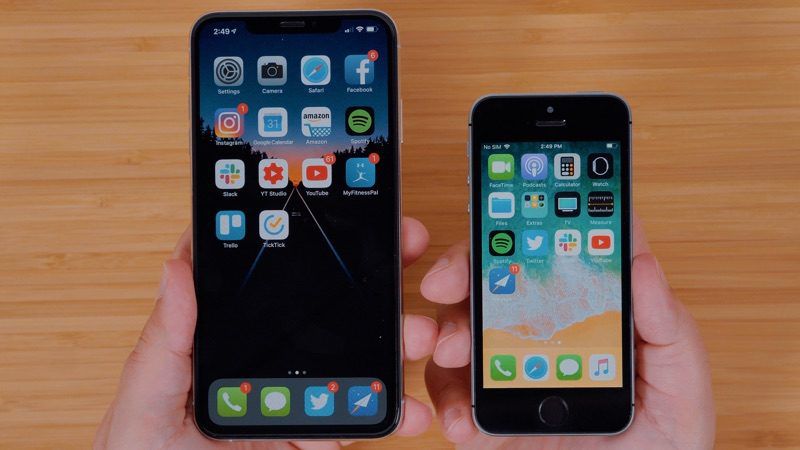 You might think it'd be noticeably slower than newer iPhones, but, surprisingly, for built-in apps it's speedy. When using Mail, Messages, Calendar, FaceTime, and other similar built-in apps, the ‌iPhone‌ SE is as speedy as 2018 iPhones.

It's not, however, able to hold up when using apps built for newer iPhones with more modern processors, nor does it have the same augmented reality capabilities. The camera is fine and is the same camera in the ‌iPhone‌ 6s, but it's lacking the improvements made over the last three years.

If you don't care about camera quality, prefer a smaller screen, and don't need to use processor-intensive apps and games, the ‌iPhone‌ SE is a compact, easy-to-hold smartphone that still holds up even in 2019.

Ahead of when the ‌iPhone XS‌, XS Max, and XR were released, there were some rumors suggesting Apple was working on a second-generation version of the iPhone SE 2.

Some of that information was conflated with ‌iPhone XR‌ rumors, though, and since the 2018 devices launched, we've heard no more about another 4-inch ‌iPhone‌ except for some chatter suggesting Apple has nixed all plans for a new ‌iPhone‌ SE.

At this point in time, it looks like the ‌iPhone‌ SE will continue to be the last 4-inch device available from Apple.

neoelectronaut
Really hopeful we get a iPhone SE followup someday. The iPhone SE I purchased back in March 2017 is still going strong and probably will last me until 2021, but I'm dreading the day when I'm forced into a bigger phone.

I don't watch video or play games on my phone, so it's the perfect size. No bigger than it needs to be but is still quite capable of everything I need it to do.

Edit: I fully expect this thread to be full of "God I couldn't imagine going back to the iPhone SE!" posts, so here's a premptive response to those: Please don't misinterpret iPhone SE owners' laments about the lack of a followup to the iPhone SE as them asking you to use one. Nobody is asking you to, chill out.

Edit 2: Also, what a bizarre-ass post. MacRumors is acting like this is a phone from a decade ago or something.

...you mean a phone that was available to purchase new at Apple's retail stores not even six months ago and that was last updated in 2017?


These questions always come off like asking 'why does anyone like brunettes?' Because people like different things than you. I love to read books, that's why I read.... books. A small phone is fine for email. I'm not blind. Your experience with the world is not the default one for all humans. You might as well be asking why do people like "blue".

Why do I want a smaller phone? Because I don't wanna carry around a dinner plate in my pocket. I wear jeans, I don't want to also have a fanny pack just to hold a phone while I'm on my motorcycle. I don't like having some giant 'tech bling' smacking against me and dragging down my shorts while I'm riding my bicycle. When I go to a bistro for lunch I don't want my phone to take up half the table if I sit it down. I do things where a large phone is annoying. I don't need or want a large phone since 'the phone' is not a lifestyle for me. I just want the tech to 'do it's thing' and then disappear into the background of my life.
Rating: 50 Votes


I loved my iPhone 5s and used it from 2013 until the XR came out last year but I think the true reason for the high demand for the SE has always been a price point that is somewhat justified and getting to be included in the Apple eco system. With so many having first gotten into iPhone using carrier subsidies they are probably many of the last of the hold outs and this price seems fair to them. I think Apple could really benefit from updating this form factor and price a new version around $400 and many would be happy to stay and not go off to Android where they can get a phone free still.


I can only speak from personal experience, but it's all about the size for me, not the price point. If Apple offered a variant of the XR hardware in the form factor of the iPhone SE I'd pick one up even at $749.
Rating: 48 Votes


Some of us like the small size, the portability, and ease of use of the SE. It fits into pockets, can fit into one (small) hand, and is a lovely size.

And, not all of us use phones for email (I have a MBA for that), or reading books (I read actual books) or when consuming media; again, I'm happy to let my MBA handle that.

It is a phone; that is what I chiefly use it for.
Rating: 39 Votes


You kinda answered your own question in your post there.

I don't want to read books, news, or watch media on my phone, so I don't need a big phone.

I would however like to be able to make phone calls, send text messages, browse the web when necessary, use map applications, take pictures, and other smartphone things, none of which require a tablet-sized display.

Uh, no. Some of us don't need more than that (we have computers for processor power), and we will hold on to it for as long as possible.


I passed along my launch day 5c to my mom when I picked up my SE in 2017 and she still uses it to this day. Does everything she needs to in a phone (and more, really)
Rating: 38 Votes

stillone
I have owned the 5SE since it came out and I have no plans on getting a new phone until this one fails. I am not alone in disliking the size of newer phones. I prefer a small phone with no case that easily fits in my front pockets.
Rating: 36 Votes

"the SE was Apple's first take on a budget iPhone"


I'm sorry, what? The 5C surely wasn't that forgettable, was it?
Rating: 28 Votes

tourbus1
I love the size of my SE, I was hoping the rumours of an upgraded version being released were true. It's the perfect size for me.
Rating: 23 Votes

mondaiguy
Still rocking multiple SEs here, with my small hands. Dreading the day I have to upgrade. I will hold out as long as possible. Hope Apple makes a small phone again soon.
Rating: 22 Votes