As part of its efforts to rebuild Apple Maps, Apple has been collecting street-level data with LiDAR-equipped vehicles for over three years, with at least 45 states across the U.S. partially surveyed to date. 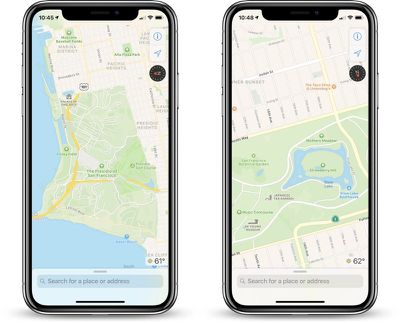 That total is set to rise in the coming months, as Apple has confirmed it will begin surveying Alaska, South Carolina, and Tennessee between March and July, according to an update to its recently revamped Apple Maps image collection website. Data collection is also set to continue in seven other states over that time.

Apple is conducting ground surveys around the world to collect data which will be used to improve Apple Maps. Some of this data will be published in future Apple Maps updates. We will also periodically revisit some locations to gather new data in an effort to maintain a high-quality, up-to-date map. We are committed to protecting your privacy while conducting these surveys. For example, we will blur faces and license plates on collected images prior to publication.

To our best knowledge, the only states that Apple has yet to confirm surveying are Arkansas and Oklahoma, although Twitter users have spotted the vehicles in both states since last year and perhaps earlier. It's possible the vehicles were only passing through those states without collecting mapping data.

Whether the total is 48 or 50 states, Apple's surveying efforts have reached nearly every corner of the United States. Apple plans to roll out its improved Maps app across the country section by section over the next year.

The improvements first rolled out in Northern California in iOS 12 and have extended to Hawaii and Southern California over the past few months. The overall look and feel of Apple Maps is mostly the same, but zooming and panning reveals more details like grass, trees, sports fields, and parking lots.

‌Apple Maps‌ vehicles have also surveyed parts of Croatia, France, Ireland, Italy, Japan, Portugal, Slovenia, Spain, Sweden, and the United Kingdom, and they are headed to Andorra in April, according to Apple's website. It's unclear when the ‌Apple Maps‌ improvements will be available internationally.

citysnaps
I've been using Apple Maps exclusively for the last 5 years. It's an excellent app. I have no need for google maps.
Score: 9 Votes (Like | Disagree)

Are Apple still doing Maps business? I thought they abandoned it long time ago.

There's already 4 out of 5 (5 including me) people saying Apple Maps does not suck, you should try it, it's more accurate than G. Maps nowadays.
Score: 8 Votes (Like | Disagree)

Whether the total is 48 or 50 states, Apple's surveying efforts have reached nearly every corner of the United States. Apple plans to roll out its improved Maps app across the country section by section over the next year.

It’s going to be a shame once they wrap things up; we won’t get to see those terrifying data-collection cars in an article every month or so… until one goes rogue. :eek:

Why are you under the impression that Apple Maps “Needs to catch up to google maps”? All that matters, is that Apple Maps continuously keeps improving, as it has over the years. Is it as proficient as Google maps? You’re never going to have a concrete answer on this, but there’s no denying to Apple Maps is certainly much better than it once was.

I admit, I was a Google maps user for years, but Apple Maps from my location, is clutch when I need it most, that I don’t even use Google maps at all, anymore.

bchery21
I enjoy Maps and it's good to know they're improving it. I only turn to Google Maps for POS info which, admittedly, is a big thing.
Score: 4 Votes (Like | Disagree)
Read All Comments