As part of its efforts to rebuild Apple Maps "from the ground up," Apple has been collecting street-level data with LiDAR-equipped vehicles for over three years. Apple also deployed employees wearing LiDAR-equipped backpacks to collect pedestrian-based data starting in California late last year. 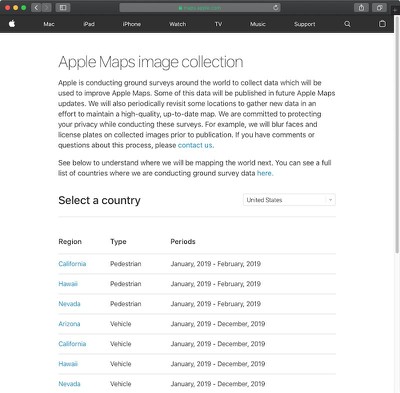 As these efforts expand around the world, Apple recently transitioned to a revamped Apple Maps image collection website with a list of locations it will be surveying both in vehicles and on foot in the upcoming months.

The page reveals a few new pieces of information, including that pedestrian-based data collection has expanded to Hawaii and Nevada through February. Vehicle-based data collection will also be expanding to the tiny European country of Andorra, landlocked between France and Spain, in April 2019.

The new page, which replaces the previous Apple Maps vehicles list, also indicates that Apple will "periodically revisit some locations to gather new data in an effort to maintain a high-quality, up-to-date map."

Apple Maps vehicles have been collecting mapping data in the United States since 2015, with over 45 states at least partially surveyed to date. The vehicles have also surveyed parts of Croatia, France, Ireland, Italy, Japan, Portugal, Slovenia, Spain, Sweden, and the United Kingdom, according to Apple.

Back in June 2018, Apple said the revamped mapping data would roll out section by section across the rest of the United States over the following year. The improvements first rolled out in Northern California in iOS 12 and have extended to Hawaii and Southern California over the past few months.

Still not entirely convinced those weren't inventors disguising their jetpacks by slapping an Apple Maps sticker on.

If only they had something similar to Street View coming out. Maybe call it Eye level or something.

I earnestly tried Apple Maps a couple years ago and it often would ignore portions of main roads thereby sending me on circular back-country journeys. Every time I used Apple Maps something strange would happen. I gave up and went back to using Google Maps.

A lot has changed in a couple of years...
Score: 5 Votes (Like | Disagree)

As a map geek i love this.

Me too. This was a fascinating dive into Apple Maps and Google Maps -- and specifically the latest detail updates to Apple Maps.

Definitely confirms what I've generally experienced: Apple Maps is getting quite good for wayfinding, but lags Google in place and business labelling.

Looks like this guy posts about once a year on the topic of digital app-based maps -- wish it was more!
Score: 4 Votes (Like | Disagree)

ghostface147
If only they had something similar to Street View coming out. Maybe call it Eye level or something.
Score: 3 Votes (Like | Disagree)

fathergll
As a map geek i love this.
Score: 2 Votes (Like | Disagree)
Read All Comments

Saturday May 30, 2020 4:00 pm PDT by Eric Slivka
Apple today doubled the price for upgrading the RAM on the entry-level 13-inch MacBook Pro, with customers in the United States now being charged $200 to move from 8GB to 16GB compared to the previous $100 upgrade price. Similar increases are seen in other countries, such as moving from €125 to €250 in Germany and from £100 to £200 in the United Kingdom. Current pricing on RAM upgrade for ...
Read Full Article • 300 comments

Monday June 1, 2020 7:50 am PDT by Joe Rossignol
If you are still hanging on to a Mid 2012 model of the 15-inch MacBook Pro with a Retina display, and require a new battery or other repairs, be sure to book an appointment with a service provider as soon as possible. In an internal memo today, obtained by MacRumors, Apple has indicated that this particular MacBook Pro model will be marked as "obsolete" worldwide on June 30, 2020, just over...
Read Full Article • 158 comments