Google is planning to unveil a cheaper smartphone as part of an aggressive effort to draw more users into the Google ecosystem and to better compete with Apple, according to a recent report from Nikkei.

Google is said to be planning to exploit Apple's current pricing issues. Apple suffered poorer iPhone sales than expected during the holiday quarter, and one major factor was the high cost of iPhones around the world. 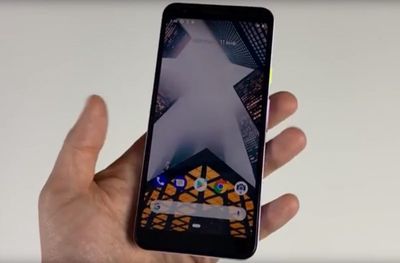 Google's alleged low-cost smartphone, via Andro News
Google's upcoming smartphone will be priced similarly to Apple's iPhone XR, which costs $749 for the entry-level model in the United States. Google is targeting customers looking for a more affordable smartphone option and customers in emerging markets where higher-priced smartphones don't sell well.

Prior Google smartphones, such as the latest Pixel, have started at higher prices. The 2018 Pixel 3 released in October was priced starting at $799.

Along with a new lower-cost smartphone, Google is planning on hardware that includes new smart speakers, wearables, and web cameras. Google has been planning its hardware push for years and has scooped up hundreds of hardware engineers and supply chain specialists from Apple.

Google wants to use Google-branded hardware to push various Google services, a tactic that has been successful for Apple.

Alleged photos of Google's lower-cost Pixel smartphone surfaced earlier this year, depicting a device that looks a lot like the Pixel 3 but with a plastic shell.

It's not entirely clear when Google will debut the new lower cost smartphone, but one solid guess is Google I/O, which will take place in May.

jayducharme
So how is releasing a device at the same price as the XR going to attract people looking for a cheaper phone?
Score: 29 Votes (Like | Disagree)

Google has had a decent number of hardware issues with their Pixel phones (in addition to lots of software issues), so I don't know that your case is really being made here. And if you have to deal with their support, they are TERRIBLE. Bad enough to make my wife get an iPhone, and she hates everything Apple.

Yep, can attest. Bloke at work had the Pixel 2 XL. Smashed the screen.

2-3 week repair time (UK). And it cost around £250 (direct from Google, else their warranty would be void with a 3rd party repair), which is about as much as “eye-gouging Apple” charge.

Every flagship-Android user I know seems to gloat, unprompted, about not being stupid enough to pay £1000 for an iPhone X. Yet they’re paying just as much for their Google/Samsung flagship phone and it comes with an armload of privacy issues, considerably worse aftersales support, and its specs can’t even touch the A-series SoC.

I really have to wonder what they’re so smug about. Congratulations. You’ve avoided buying from one massive corporation by spending the same amount of money with an equally massive corporation instead. Talk about being off the grid.
Score: 13 Votes (Like | Disagree)

Won’t be that hard for Google to bring a cheaper but more capable device to market than iPhone XR.

Based on what? Their bang up success of the Pixel line?

Google’s offering doesn’t compete with Apple because it runs Android, not iOS. Google is competing with other Android phones and barely making an impact there.
Score: 13 Votes (Like | Disagree)

And then say how a low cost android phone priced the same as XR will win sales.
Score: 10 Votes (Like | Disagree)

spacemnspiff
Why is the Pixel not cheaper since the OS is barter for data mining? Pixel line of phones should be half the price of what they are because of free OS or Google is charging too much and Apple is charging too little for their phones.
Score: 10 Votes (Like | Disagree)

Google has had a decent number of hardware issues with their Pixel phones (in addition to lots of software issues), so I don't know that your case is really being made here. And if you have to deal with their support, they are TERRIBLE. Bad enough to make my wife get an iPhone, and she hates everything Apple.
Score: 8 Votes (Like | Disagree)
Read All Comments