Google's answer to the iPhone XR appears to be close to launch in the form of a more affordable version of its flagship Pixel 3 smartphone, if a new video leak is accurate. 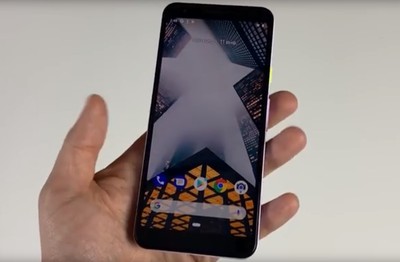 Andro News apparently got hold of a pre-production unit of the upcoming mid-range phone, which is dubbed Pixel 3 "Lite". The device closely resembles Google's high-end Android phone from the front, but the big difference is its plastic rear, which is likely more durable than the metal and glass chassis on the Pixel 3.

The upcoming phone is said to use a 5.56-inch 2,220 x 1,080 LCD display instead of an OLED panel, along with a Snapdragon 670 processor, 32GB of storage, 4GB of RAM, and a long-life 2,915 mAh battery. Notably, the device also includes a headphone jack, something that was removed for the Pixel 3.

Perhaps the bigger news though is that the "Lite" model uses the same 12-megapixel camera and optically-stabilized lens as the Pixel 3, which has received high praise across the board for its photographic capabilities. (Regular MacRumors readers may recall our Google Pixel 3 XL vs. iPhone XS Max comparison found that the devices offer comparable camera quality overall, with only a few differences between shooting modes.)

Andro News claims the new phone takes "the same quality photos as the Pixel 3," although given that much of Google's image-processing is software based, it's impossible to say how the cheaper model's mid-range Snapdragon SoC will affect real-world camera performance.

Pixel 3 Lite leaked. Same exact camera results as the Pixel 3 proper https://t.co/bGD39kLCCR With the right price and approach this could be a bit of a hit. But I doubt Google will try to manufacture enough units — Alex B 📉 (@somospostpc) January 17, 2019

There's been no word on the exact pricing for Google's upcoming Pixel phone, which is expected to come in two sizes, but considering the Pixel 3 starts at $799, there's a good chance the smaller model will undercut Apple's ‌iPhone XR‌, which starts from $749.

In other differences described in the video leak, the "Lite" model has only one front-facing camera whereas the Pixel 3 has two, the additional autofocus sensor on the back is missing, and there's no additional front-facing speaker on the "Lite".

Google usually makes its big hardware announcements during Google I/O which is held in the spring, so we'll probably have to wait until then for more information unless the leaks keep coming.

dominiongamma
Saw the video before and people still defending 720 p in a device in 2019 is sad because 1080p should be a minimum for a lower end phone now. But if this was reversed Apple fans would destroy Google for not putting in 1080.
Score: 7 Votes (Like | Disagree)

Saw the video before and people still defending 720 p in a device in 2019 is sad because 1080p should be a minimum for a lower end phone now. But if this was reversed Apple fans would destroy Google for not putting in 1080.

Clearly you still dont or wont get it that pixel count means little. Quality of the panel means much more than number of pixels.

The Pixel 2XL was a good example of that, high pixel count crap LG panel.
Score: 3 Votes (Like | Disagree)

Clearly you still dont or wont get it that pixel count means little.

Sorry some people can see differences, that’s like saying 720 and 1080 is no difference but it’s a major difference. If that’s the case Apple would have not increased the pixel count on the XS Max.
Score: 2 Votes (Like | Disagree)

drinkingtea
The Pixel 3 and the Pixel 3 XL sound like a dumpster fire. These phones are making even loyal Google users switch to iOS/other Android phones. I can’t see how these phones will be any better.

Most XR owners don’t even know this.
Score: 2 Votes (Like | Disagree)
Read All Comments

Thursday July 9, 2020 10:14 am PDT by Juli Clover
Apple today seeded the first public betas of upcoming iOS and iPadOS 14 updates to its public beta testing group, two weeks after first providing the updates to developers after the WWDC keynote and a day after seeding the second developer betas. Public beta testers who have signed up for Apple's beta testing program can download the iOS/‌iPadOS‌ 14 updates over the air after installing ...
Read Full Article • 145 comments