Apple was the number two smartphone vendor in the world during the 2018 holiday quarter with an estimated 68.4 million iPhones shipped, according to new data shared today by IDC.

IDC's new iPhone shipment estimates come one day after Apple's Q1 2019 earnings call, which corresponds to the fourth calendar quarter of 2018. Apple no longer provides unit sales of ‌iPhone‌, iPad, and Mac, leaving it to analysts to guess just how many devices were sold. 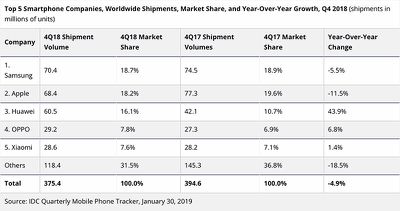 Samsung was the number one smartphone vendor during the quarter, according to IDC, with 70.4 million smartphones shipped for 18.7 percent market share.

Apple saw iPhone volumes drop 11.5% in 4Q18 marking one of the more challenging iPhone quarters in terms of growth, despite the three new models. Total iPhone volumes were down 3.2% for the full year, which is understandable considering its two largest markets (the United States and China) both experienced the worst year for smartphone performance ever. Apple is certainly not out of the game, but the likelihood of not having a 5G iPhone in 2019 means it will need to tell a strong iPhone and, more importantly, ecosystem story to succeed. If anyone can do it, it is Apple. But it certainly won't be easy when faced with all the other downward market pressures.

IDC's data suggests that Apple sold more devices than Huawei, with Huawei shipping 60.5 million smartphones during the quarter. Huawei and Apple have been fighting for the number two position, with Huawei surpassing Apple during the second calendar quarter of the year.

Huawei is the smartphone vendor that saw the most growth during the quarter, with shipments up 43.9 percent. Oppo and Xiaomi were the number four and five smartphone vendors, respectively, with 29.2 and 28.6 million smartphones shipped.

Overall, IDC says that 375.4 million smartphones were shipped during the quarter, down 4.9 percent year over year and marking the fifth consecutive quarter of decline.

"Globally the smartphone market is a mess right now," said Ryan Reith, program vice president with IDC's Worldwide Mobile Device Trackers. "Outside of a handful of high-growth markets like India, Indonesia, Korea, and Vietnam, we did not see a lot of positive activity in 2018. We believe several factors are at play here, including lengthening replacement cycles, increasing penetration levels in many large markets, political and economic uncertainty, and growing consumer frustration around continuously rising price points."

With Apple no longer offering a breakdown of unit sales of the ‌iPhone‌, ‌iPad‌, and Mac, analyst estimates from sources like IDC and Strategy Analytics won't be able to be confirmed.

bladerunner2000
When you make a phone without a headphone jack and then rip people off with ridiculous prices... this is bound to happen.

Congrats Apple, you're starting to sink.
Score: 35 Votes (Like | Disagree)

magicschoolbus
People are bored with their iPhones.

Ghost31
I’m ok with apple selling less. I want to see them sweat for awhile and hopefully some kinda innovation finally comes. Right now the headlines are “apple sold 11 million less iPhones this year than last year” and all the apple fans are sniffing their own farts and pretending like it doesn’t matter. And “apple is doomed right? Haha” keeps on going but it’s really like ok...

We are at a peak in smartphones and people are keeping them longer and price is a real issue. At what point does anyone start talking about apple having to step up their game? When they sell 20 million less? 30? They’re a highly profitable company but at the same time, it is important to notice trends and where things are going. And I really hope apple is reactive to this and not just sticking their heads in the sand all “everything’s fine ! People love price increases!”
Score: 14 Votes (Like | Disagree)

fermat-au
The second table in IDC report, that wasn't included in the MacRumors story, is actually more relevant. It show volume across the whole of 2018, not just Q4

Apple and Samsung were quite close in sales in 18Q4, but Samsung were significantly ahead of Apple and all other companies in overall 2018 shipments. Apple's Q4 is always much better than their Q1, Q2 and Q3, as Q4 is not only the holiday quarter but also the quarter the new iPhones are released. Samsung's phone sales are spread more evenly

Rocketman
I would like to see net profit as a field in that table. :D

To respond to the whiners, because it is a BUSINESS and units sold is good for the ego, but profits received is the actual measure stockholders care about.

If you are whining and neither have an iPhone or iPad and have no APPL stock, why are you even posting? I ask.