With 54.2 million smartphones shipped in the second calendar quarter of 2018, Chinese smartphone company Huawei has surpassed Apple to become the number two worldwide smartphone vendor, according to new data shared today by IDC. 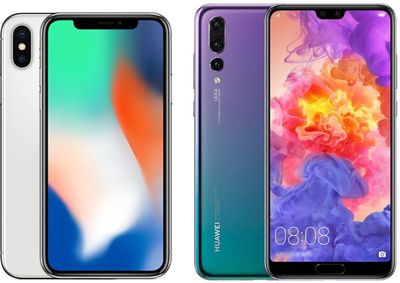 According to IDC, Apple's share of the smartphone market for the quarter was 12.1 percent, compared to Huawei's 15.8 percent. Huawei saw 41 percent year-over-year growth in market share with an increase of 15.7 million smartphones shipped in Q2 2018 compared to Q2 2017.

While Apple's iPhone shipments were largely stagnant year-over-year, the higher average selling price it achieved with the iPhone X resulted in an impressive 20 percent increase in revenue and iPhone earnings of nearly $30 billion.

IDC's numbers look only at total number of smartphones shipped, with Huawei seeing major growth in the $600 to $800 segment thanks to the P20 and P20 Pro series.

We are likely to see shifts in these smartphone vendor rankings over the course of the next few quarters as this is Apple's weakest quarter. At this point, Apple's flagship iPhones are several months old, which always results in a slowdown in sales. After new devices are released in the fall, Apple will see much stronger shipment numbers during the fiscal fourth quarter of 2018 and first fiscal quarter of 2019.

Apple dropped to the third spot for the first time despite its second quarter growth. Apple shipped 41.3 million iPhones, representing modest growth of 0.7% over the 41.0 million units shipped last year. The iPhone continued to perform well at the high end as the iPhone X remains a top seller in many markets. Apple will look to regain control of the market this fall with the expected launch of three next generations of iPhone models. The new models are rumored to bring different screens sizes, price points, increased performance, and new features to the table when they arrive next quarter.

Rumors suggest Apple plans to better compete in the mid-priced smartphone market in late 2018 and 2019 with a lower-priced 6.1-inch feature-rich iPhone that offers Face ID, an edge-to-edge display, and the same fast processor as the company's more expensive OLED models.

Interesting as this fake news comes up in the day that Apple releases their quarterly earnings.

If Huawei is selling that many phones, where is the money of the said sales?

Well duh. How on earth can our products compete in markets that tariff the crap out of American goods? The same iPhone 8 64GB sells for 790$US in China vs $699 in the US.

How on earth can Huawei compete when the U.S. doesn't even allow Huawei to be sold?
Score: 32 Votes (Like | Disagree)

Quu
Apple could do with moving down further. They need to get hungry again.
Score: 20 Votes (Like | Disagree)

pradeepbabloo
Looks like Huawei, Xiaomi and OPPO will be top three in few years.
And Samsung/Apple should share next spots respectively!
Regardless Apple will still lead the profits by quite a margin. Quantity doesn't matter!
Score: 17 Votes (Like | Disagree)

nibfiledotcom
Sure, it's the classic recipe for success... diligently copy everything about Apple's products and marketing. Oh, and maaaaaybe also be willing to deeply integrate spyware on behalf of the Chinese government. Or maybe not.
Score: 17 Votes (Like | Disagree)

Not true. Huawei still sells tons of phones in the US via Amazon and other online shops:

A couple of scrappy resellers on Amazon selling products with no warranty.

The fact that Huawei climbed to #2 in spite of the ban in the U.S. on Huawei phones is impressive.
Score: 15 Votes (Like | Disagree)
Read All Comments