Tim Cook Says Apple Plans to Participate in the 'Breakdown of the Cable Bundle' With AirPlay 2, Original Content and More

Apple CEO Tim Cook today commented on the opportunities Apple sees in the video market, though he declined to provide details on the company's specific plans.

Cook said that Apple sees "huge changes" taking place in customer behavior, which the company expects to "accelerate as the year goes by." Specifically, Cook said that Apple is expecting an acceleration of the breakdown of the cable bundle. "I think it'll likely take place at a much faster pace this year," he said. 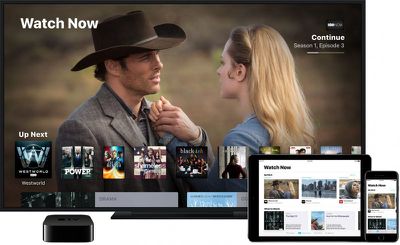 Apple plans to "participate in that" in a number of ways, including the Apple TV, which offers support for apps so customers can watch television content on a per-app basis, and AirPlay 2, which will soon support third-party television sets. Cook said Apple is "excited" about the expansion of ‌AirPlay‌ 2 compatibility to third-party television companies because it will make the experience with people using Apple products in the living room "even better."

Cook said that third-party video subscriptions available on the App Store provide another opportunity for Apple that could "accelerate in the future" as customers are likely to buy multiple services, and finally, Cook pointed towards Apple's own work on original content.

Finally, original content, where we will participate. We've signed a multi-year partnership with Oprah. Today I'm not really ready to extend that conversation beyond that point. We've hired some people we have a super amount of confidence in, and they're working really hard. We'll have more to say on that later.

Rumors have suggested Apple is working on a full streaming television service to distribute both its original content and content from third-party providers such as HBO and STARZ. At least some of the content Apple is creating could be available for free, and Apple is said to be planning to integrate the service and the new TV shows into its TV app.

Apple has more than two dozen original television shows in the works, many of which are in the casting stages, with filming likely set to begin soon. Apple has also purchased movies and inked deals with well-known industry talent including Jason Katims and Justin Lin.

Apple is aiming to have its streaming television service ready for a mid-April launch, and has been telling its launch partners to prepare for that date. An actual release could come right around that target date.

vicviper789
Yes, break down cable by having about 7-8 different subscription services where each only has 1-2 shows you want to watch for the low price of $15-20 a month.
Score: 11 Votes (Like | Disagree)

Williesleg
I can see it now.

gbc204
You know what I need? A service that bundles all the streaming services I want for one price. So I can get ABC, CBS, NBC, FOX, ESPN, HBO all in one package. Why hasn't anyone thought of that?
Score: 5 Votes (Like | Disagree)

It pains me that in order for me to win I have to let go of this notion that Oprah must lose.

I'm hearing that in the voice of your Dr. Phil avatar.
Score: 5 Votes (Like | Disagree)
Read All Comments

Friday August 12, 2022 12:46 pm PDT by Juli Clover
Samsung this week launched its fourth-generation foldable devices, the $1,000 Galaxy Z Flip and the $1,800 Galaxy Z Fold. Though there's no sign of a comparable Apple foldable device on the horizon, rumors suggest prototypes are in the works, so we thought we'd take a look at Samsung's newest smartphones to see what Apple needs to measure up to when a foldable iPhone does come out. Subscribe ...
Read Full Article • 279 comments