Apple is rumored to be working on a subscription-based service that will be offered in the Apple News app, and hints of that service were discovered in the iOS 12.2 beta. 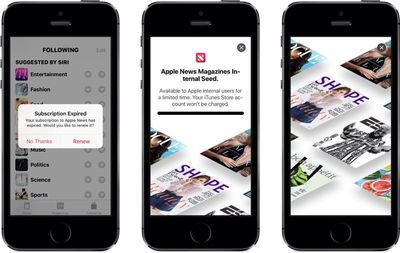 Apple appears to be testing such a service internally based on images found in iOS 12.2 by 9to5Mac. A hidden landing page indicates Apple is going to call the service "‌Apple News‌ Magazines," with customers able to subscribe in the ‌Apple News‌ app.

Billing appears to be handled through iTunes, much like Apple Music, and there are also reportedly hints of a "bundle subscription," suggesting rumors that Apple will develop an all-in-one subscription option for TV, ‌Apple Music‌, and magazines could be accurate.

The interface for ‌Apple News‌ Magazines is similar in design to Texture. Texture, which is still available via the App Store, provides access to over 200 popular magazines like People, The New Yorker, Time, National Geographic, Shape, Newsweek, and more, all for a $9.99 per month fee.

‌Apple News‌ Magazines could work similarly, though rumors have suggested it will also include news subscription options, and pricing is unclear. In September, Apple was rumored to be aiming to get major newspapers like the Washington Post and the New York Times to join its subscription service.

Late 2018 rumors indicated that Apple would launch its subscription news and magazine service in spring 2019, which could line up with the launch date of iOS 12.2. Apple has also held a March event for the last several years, and if such a service is in the works for spring 2019, a March event would be an ideal time to unveil it.

Early 2019 is also the prospective launch date for Apple's rumored TV streaming service, so it's quite possible both this news service and the TV service will be announced at the same time.

rmoliv
Let me anticipate this... It'll be available only in the U.S., UK, Australia and, now, Canada as well?
Score: 4 Votes (Like | Disagree)

riverfreak
Let’s hope the subscriptions aren’t just to PDFs like Texture. Reading a PDF on a mobile device wasn’t worth the low price of the Texture subscription. Far better to have a dedicated app with responsive formatting.
Score: 4 Votes (Like | Disagree)

nt5672
Bet it's only a few magazines, that are authorized by Apple as politically correct. Most magazines won't want to be part of the Apple machine because of Apple's tax. This will be IMO just another poorly implemented Apple service to keep Wall Street happy and giddy. Do these Wall Street types actually use any Apple hardware?
Score: 2 Votes (Like | Disagree)

itsmilo
The news app is just too overwhelming like I don’t even know where to start reading so I end up not reading anything at all
Score: 2 Votes (Like | Disagree)

jmh600cbr
I’d like to see a bundle that includes music, tv and magazines for $20-30 a month for a family. My wife and I would get it for sure.
Score: 2 Votes (Like | Disagree)
Read All Comments