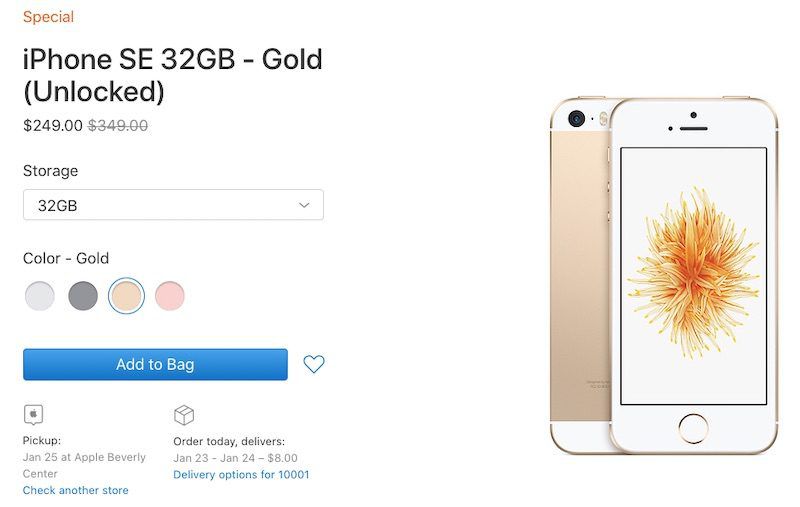 Apple is offering the iPhone SE with 32GB of storage for $249 and with 128GB of storage for $299 on its clearance store in the United States. These are brand new, unopened, and unlocked models with unchanged tech specs, including a 4-inch Retina display, A9 chip, Touch ID, and 12-megapixel rear camera.

Prior to being pulled, the ‌iPhone‌ SE was available with 32GB and 128GB of storage for $349 and $449 respectively, so Apple is offering $100 to $150 off. The device was originally released in March 2016 and was popular among fans of smaller smartphones and those who preferred the ‌iPhone‌ 5-like design.

It's unclear why Apple is selling the ‌iPhone‌ SE again, but it would appear to be clearing out stock. The ‌iPhone‌ SE remains on sale at select authorized resellers, as reflected on Apple's compare iPhone models page when the ‌iPhone‌ SE is selected. 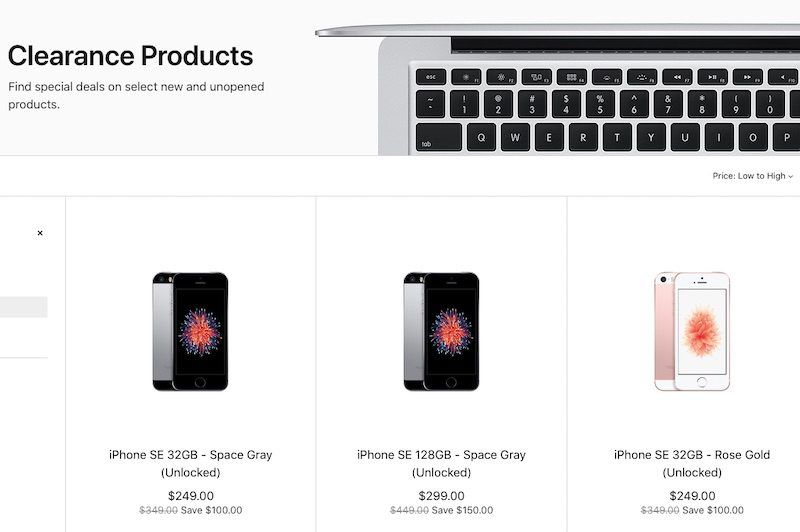 Of course, with Apple recently lowering its revenue guidance for the quarter just ended due to fewer ‌iPhone‌ upgrades than it anticipated, speculation will certainly mount that Apple is doing everything it can to boost ‌iPhone‌ sales.

While many customers have hoped for a so-called iPhone SE 2, with some rumors suggesting one was in the works, oft-accurate Apple analyst Ming-Chi Kuo cast doubt on the possibility of a new ‌iPhone‌ SE last year. And in July of last year, one research firm said Apple abandoned its plans for a new ‌iPhone‌ SE.

Apple is offering the iPhone SE in Silver, Space Gray, Gold, and Rose Gold, with delivery or in-store pickup available by next week.

As of now, this appears to be U.S. only.

Update: ‌iPhone‌ SE stock is sold out as of Sunday morning.

Update 1/23: Apple has additional ‌iPhone‌ SE models in stock as of Wednesday afternoon, but available supply may sell out quickly.

GuruZac
Desperate times... No, actually, it's still a great little phone. Now they need to take the XR design, shrink it down to around the SE size, and watch how many people buy it. I'm not a small phone person but I think there's a big enough market to justify an SE2. I actually think if they stuffed the A11 processor, upgraded camera, added an upgraded display to wide gamut, they could sell this thing fro $400-$450 all day.

TwoBytes
Apple thinks they are listening to the public by selling lower-cost phones but just to clarify Tim, we didn't mean old phones you don't support anymore..
Rating: 73 Votes

Böhme417
At those prices, anyone in the market for an iPod Touch would be very foolish not to get this instead.
Rating: 59 Votes

It's unclear why Apple is selling the iPhone SE again, but it is likely clearing out stock.


Anyone else think this move is strange?

I can't remember another time that Apple discontinued a device, then months later, start to sell it again as clearance.
Rating: 54 Votes

brock2621
This was such an awesome little phone and at that price is almost disposable for employees in high risk jobs/traveling.
Rating: 50 Votes

Apple thinks they are listening to the public by selling lower-cost phones but just to clarify Tim, we didn't mean old phones you don't support anymore..


Well i guess it's a good thing they still support it then.
Rating: 41 Votes

Apple thinks they are listening to the public by selling lower-cost phones but just to clarify Tim, we didn't mean old phones you don't support anymore..

They don't support the SE? They support back to the 5S, two generations older than the SE.
Rating: 35 Votes

Glideslope
Holy Mother of Pearl. Tim must have had them stashed in his basement. :apple:
Rating: 31 Votes