Video platform Vimeo today is expanding its recent focus on software tools for video creators, part of a continued pivot away from earlier attempts to get into original content creation itself. Vimeo CEO Anjali Sud confirmed the move to Axios today, explaining that the company saw "so much organic growth" from software tools it already sells that the pivot "became a no-brainer."

Currently, Vimeo calls itself "the high quality home for video hosting and watching," with many videos like short films, documentaries, and more residing on the service. Vimeo found a niche for smaller content creators to host their videos on its site, since they could sell their content to interested viewers and take 90 percent of the revenue each video earned after fees. 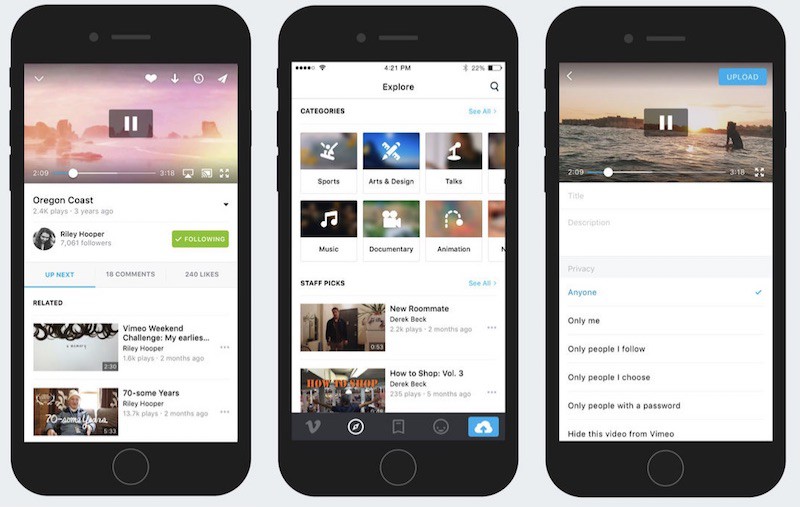 Now, as more tech companies enter the already "saturated" video viewing market, and are willing to invest billions in original content, Vimeo has pulled back from competing in that space to focus on helping professional creators through the launch of tools such as stock video clips.

The pivot allows Vimeo to go after a less competitive social “SaaS” (software as a service) market that focuses on stock video, as opposed to the saturated original content viewing market, which is dominated by massive tech companies investing billions in original content to win eyeballs.

“Today 100% of our business model is software as a service, like a Dropbox or a Slack … We just saw so much organic growth from the software tools side among the creators that it became a no-brainer that this is what we should focus on.”

Although Apple is not directly mentioned, the company has set aside a "$1 billion war chest" in planning its upcoming streaming television service, and Vimeo has recognized that this expensive pursuit of original content is making for a very crowded marketplace. Ahead of a rumors 2019 launch, Apple has hired executives from Sony Pictures and Amazon Studios, prepared a lineup of over a dozen original shows, and is said to be "completely all in" on original content, according to iTunes chief Eddy Cue.

Vimeo does have a small collection of original series, but its Vimeo Originals platform never took off in comparison to rival video services. Ahead of the pivot, over the past year Vimeo has been "trying to pull back" from being a video viewing platform by "no longer investing in original content." Instead, Vimeo will now present itself as an "agnostic and independent home" full of tools and services that let creators edit their work, to then be shared on other platforms like YouTube or Facebook Watch.

“Most large video-viewing destinations, like YouTube and Facebook, are ad supported, and are focused on keeping content and eyeballs on their platform. But if you’re a creator, you need an agnostic and independent home to create and distribute your work and there really are no other creator platforms that do that at scale.”

On the other side of the equation, Vimeo says it will offer contributors of stock footage for the service a "higher revenue share" than its competitors, as much as 60-70 percent of revenue generated from their content.

As part of its quiet year-long move away from its own original content creation, Vimeo in April launched a dedicated macOS app aimed at Final Cut Pro users. The app gives these users "more control over file formats and video codecs," and integrates Vimeo with Final Cut Pro to export ProRes videos, manage uploads, share videos for team reviews, and more features that are exclusively focused on content creation and editing.

For Apple devices, Vimeo is available on iPhone, iPad, and Apple TV, but the company did not give any word regarding how these apps will change following the pivot.

Update: This article has been updated to clarify that Vimeo is not moving away from its traditional video hosting platform for creators. The company's ongoing shift away from its own original content is being augmented with today's launch of Vimeo Stock tools to assist independent creators with producing their own content.

macduke
Saturated…by YouTube only? I really wish someone could shake this up, but the sheer resources needed to even begin competing are overwhelming.
Score: 4 Votes (Like | Disagree)

CBlakeston
This is Vimeos Actual announcement from their email. At no point does it say they're getting out of the hosting business. MacRumours.. why are you reporting they are?

Vimeo Stock is here: featuring exclusive stock footage for your next project
Starting today, you can find the best clips for your project with the all-new Vimeo Stock: handpicked, royalty-free stock footage you can’t find anywhere else, and special savings for Vimeo members.

Stock that doesn't look like stock
Vimeo Stock combines the best clips from around the world — carefully curated by our team — from creators sharing footage for the first time, exclusively on Vimeo. The result? High quality footage that looks like nothing else.

Fits your workflow
After you purchase a clip, it’s added to your videos page (and doesn’t affect your storage). So you and your team can organize, review, showcase, or customize your stock clips just like the rest of your videos.

Supporting Independent Creators
Vimeo Stock is about supporting our community, which is why creators keep up to an industry-leading 70% of their clip revenue. So when you buy clips from filmmakers in our community, you’re directly supporting independent creators.
Score: 4 Votes (Like | Disagree)

mtneer
I never got what Vimeo's model was. They only hosted short clips and esoteric content (well made, no doubt) but without any apparent commercial value - either to Vimeo or to the creator (other than maybe serve as a portfolio host for the creator looking for new gigs).

Maybe this software/ tools focus can deliver some value. But how that would work in a world dominated by Premiere and Final Cut is also unclear..
Score: 3 Votes (Like | Disagree)

HUGE Mistake for that company

If there was no profit to be made in hosting content, not a mistake to shutter that service.
Score: 3 Votes (Like | Disagree)

DBZmusicboy01
HUGE Mistake for that company
Score: 2 Votes (Like | Disagree)
Read All Comments

Saturday May 30, 2020 4:00 pm PDT by Eric Slivka
Apple today doubled the price for upgrading the RAM on the entry-level 13-inch MacBook Pro, with customers in the United States now being charged $200 to move from 8GB to 16GB compared to the previous $100 upgrade price. Similar increases are seen in other countries, such as moving from €125 to €250 in Germany and from £100 to £200 in the United Kingdom. Current pricing on RAM upgrade for ...
Read Full Article • 256 comments