Apple CEO Tim Cook is poised to receive 560,000 shares of Apple stock on Friday, worth approximately $120.4 million based on Tuesday's closing price of $215.04. The two-part award is tied to Cook's continued service as CEO, and Apple's relative performance on the stock market under his leadership. 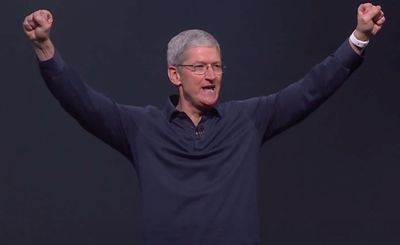 Apple's total shareholder return was 119 percent from August 25, 2015 through Tuesday's closing bell, outperforming more than 80 percent of firms in the S&P 500, according to Bloomberg. So, unless Apple suffers a major collapse on the stock market in the next 48 hours, Cook will receive all 560,000 shares.

Cook receives these annual awards as part of a grant he received upon succeeding the late Steve Jobs as CEO of Apple in 2011.

Cook will receive an additional 560,000 shares in each of the next three years if he remains CEO, and Apple's total shareholder return continues to rank among the top-third of companies in the S&P 500. He is also set to receive a lump sum of 700,000 tenure-based shares on August 24, 2021, as part of his grant.

Cook also receives a $3 million salary and earned a $9.33 million cash bonus in 2017, according to Bloomberg.

Cook now has a net worth of around $700 million, according to Bloomberg, but has previously said he plans to give away most of his wealth. Just this week, an SEC filing revealed that Cook recently donated 23,215 shares of Apple stock to charity, worth nearly $5 million based on Tuesday's closing price.

pier
And yet the Mac is in its worst shape probably since the Scully era.
Score: 64 Votes (Like | Disagree)

Macatize
I love the picture for this article.
Score: 55 Votes (Like | Disagree)

I love the picture for this article.

I like how the low contrast between the shirt and background makes it looks like you're supposed to chroma-key them out.

KPandian1
Escalating scale of salary not just tied to the stock price, but more to the disappointment of the customers in all the products, items returned for service and how pissed off the Apple fans get year-on-year.
Score: 36 Votes (Like | Disagree)

And yet the Mac is in its worst shape probably since the Scully era.

taptic
Well, I certainly can't think of anyone that deserves it more!