Spotify today announced that listeners across the globe can now tune into the BBC's podcast catalog directly within the Spotify app, including "hundreds of programs across thousands of episodes." In the announcement, the company focuses on podcast listeners in the United Kingdom, but it appears that BBC podcasts on Spotify are also appearing for users in the United States and elsewhere outside of the U.K.

The BBC podcasts on Spotify include shows from iPlayer Radio and BBC Sounds, covering numerous genres, which listeners can find in the Browse tab on Spotify. Podcast categories include Comedy, News and Politics, Educational, Sport and Recreation, Lifestyle and Health, Business and Technology, and Kids and Family. 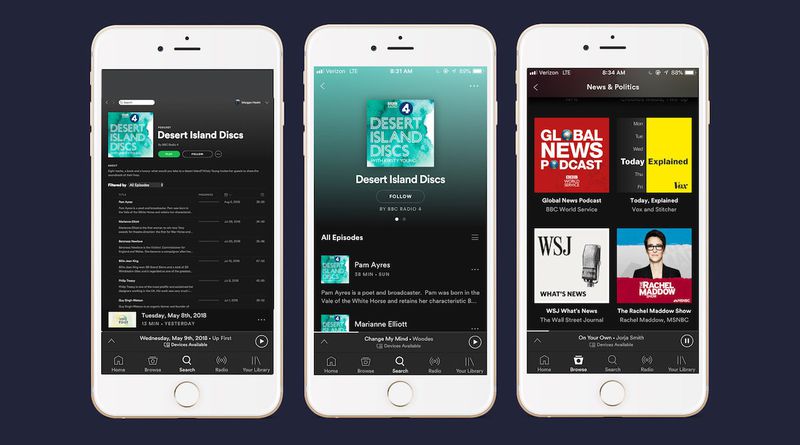 The company also recommended a few podcasts for users, including "Short Cuts," which centers on themes like "fear" and "magical realism" through the presentation of poetry, short stories, documentaries, and more. There's also "Desert Island Discs," in which host Kirsty Young asks guests to list the items they would take if they were stranded on an island.

Prior to BBC, Spotify in May added NPR's catalog of podcasts to its app. The streaming company has been making a stronger push into podcasts since July 2017, when a report from Bloomberg claimed that Spotify was "coming after" Apple Podcasts. The company started by commissioning original podcasts about music in early 2017, and has now shifted to partnering with existing podcast creators to bolster its catalog of shows.

With the addition of these content creators, Spotify's head of podcast partnerships for Europe, the Middle East, and Africa, James Cator, says that users "can now be assured of finding the perfect podcast for every moment and mood on Spotify."

“The BBC is one of the largest content creators in the UK, and have worked with the biggest and best audio talent in the world,” explains James Cator, Spotify’s Head of Podcast Partnerships, EMEA. “To have a comprehensive audio catalogue in the UK, the BBC are essential, so adding the BBC to our rapidly-expanding catalogue of podcasts was a natural partnership.” To that end, Spotify has added podcasts from iPlayer Radio and BBC Sounds to the platform, making hundreds of BBC podcasts available to Spotify users in the UK from today.

Apple rebranded iTunes Podcasts to "Apple Podcasts" in April 2017, and then at WWDC 2017 announced an overhauled podcasts app for iOS 11 that introduced changes for both listeners and podcasters. In iOS 12 this year, Apple Podcasts isn't expected to see much of a change, with beta discoveries so far limited to the introduction of custom durations for the Forward and Back options in the app.

At the time of Bloomberg's article revealing Spotify's new podcast initiative, weekly podcast newsletter author Nick Quah wrote that Apple had the majority share of the podcast market at about 55 percent. Quah then pointed out that Spotify's large user base of free and paid users (now 180 million globally) presents it with "an opportunity to steal share from Apple."

Mike MA
Nice to see Apple Music and Spotify increasingly pushing each other to further improve their offerings. It’s the customers who benefit as long as there‘s competition around.
Rating: 4 Votes