Apple has successfully completed certification of key component suppliers for its widely rumored trio of 2018 iPhones, expected to be announced in September, according to Taiwanese publication Economic Daily News. 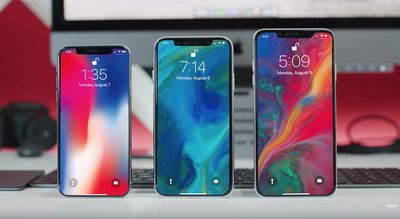 2018 iPhone imitation models via Marques Brownlee/MKBHD
The report claims that these suppliers have begun shipping large quantities of camera lenses, metal chassis, and other components to larger manufacturers, including Foxconn, which is expected to assemble the majority of 2018 iPhones, according to Taiwanese research firm Fubon Securities.

In particular, Fubon Securities said Foxconn will assemble every second-generation iPhone X, 90 percent of units for the so-called iPhone X Plus, and 75 percent of units for an all-new, lower-priced 6.1-inch iPhone. Taiwanese manufacturer Pegatron is said to fulfill all of the remaining orders.

While the supply chain is clearly gearing up for 2018 iPhones, it's unclear when volume production of fully-assembled devices will begin. Foxconn recently began its seasonal hiring spree in preparation.

Back in June, oft-reliable Apple analyst Ming-Chi Kuo said all three 2018 iPhones will be both announced and available to order this September, but Morgan Stanley analyst Katy Huberty recently cautioned that the 6.1-inch iPhone with an LCD may not launch until October due to possible issues with backlight leakage.

Of course, the 6.1-inch iPhone could end up being available to order in September with a 4-6 week shipping estimate.

If those price points prove to be accurate, we suspect the second-generation iPhone X would start at $899, with the iPhone X Plus taking over the $999 price point, and the 6.1-inch model serving as somewhat of a budget iPhone X with a $699 price tag — all, of course, based on base storage capacities.

Apple's usual September event will likely take place in almost exactly a month, so there isn't much longer until we know for certain.

jayducharme
I'm still not a fan of that notch. I'm happy with my 8 and will wait till they figure out another way to implement their facial scanning. No memojies for me for a while....
Score: 8 Votes (Like | Disagree)

Dilster3k
Glad the prices are being reduced somewhat.
Score: 5 Votes (Like | Disagree)

DNichter
Good to hear. I am eyeing the X Plus. Looking forward to it.
Score: 5 Votes (Like | Disagree)

HobeSoundDarryl
Cue the impending rumors about some key component being in short supply or having some kind of manufacturing issue, likely resulting in a shortage of new iPhones at launch. Must get the same old, same old frenzy stirred up. It's worked every single time through every generational release.

Magically though, by the end of the launch quarter, everyone that urgently wants one will have been able to get one (because the reality of maximizing rev & profits trumps the illusion of the shortages implied by a well-proven marketing formula).

polee
So looking forward to this. I hope to get the largest one.
Score: 3 Votes (Like | Disagree)
Read All Comments