Apple first announced the new flagship store in December, set to be built at Federation Square, a shopping center, public square, and mixed-used space in the heart of Melbourne. 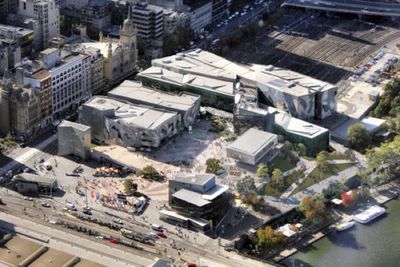 The new Federation Square design
The construction of the new store calls for the demolition of the well-known Yarra building, which has infuriated Melbourne residents and led to major protests suggesting the public space should not be given over to a corporation.

Melbourne's City Council in February backed a motion to lobby for a new store design due to both the backlash and the dissatisfaction with Apple's planned store design, which has been described as a "Pizza Hut pagoda."

Another angle of the new store design
The new design plan, created following a series of design workshops that included Federation Square Management, the Victorian Government, the Melbourne City Council, and Apple, features a building with a simpler, more streamlined look that better fits in with the Federation Square aesthetic.

The original Federation Square design proposed by Apple
The pagoda-style roof has been abandoned in favor of a flatter design that will house solar panels. The design offers 500 square meters of new public space, more outdoor shading, a better connection to the Yarra river, and plans for cultural events.

Apple's revamped design is part of a "broader reimagining" of Federation Square, which includes the new Digital Facade on the Transport Building and the new Melbourne Metro Train Station entrance.

Current plans continue to call for the destruction of the Yarra building, so it's not clear if Melbourne residents will be satisfied with Apple's planned changes. At the very least, the new design is less intrusive, which could win acceptance from protestors.

ThunderSkunk
I pulled our firm out of commercial a decade ago. I don't even know why anyone tries to build anything. Considering the process, and the opinioneering of every heehaw with a bored brain cell, it's unthinkable that civilization ever amounted to anything more than a collection of yurts on the steppe.

That said, it does look quite a lot like the Pizza Hut logo.
Score: 8 Votes (Like | Disagree)

CrapShack
So THIS is the Yarra Building that everybody in Melbourne wants to save?
Please, SOMEBODY tell me I'm wrong.

BTW, I LIKE the original Apple Store design - doesn't look like any Pizza Hut I'VE ever seen!

CrapShack
There are angles. That's it. Hey let's try this!

There ya go Melbourne!

seatton
The original design is ugly - that's just me. I know people are going to say this and that, but everyone has a different taste :)
Score: 4 Votes (Like | Disagree)

idmean
I’m glad people protested. The new design looks way better and to be honest much better suits Apple. I wonder who even approved that odd first design.
Score: 4 Votes (Like | Disagree)

Brandhouse
Too many radical green protesters in Melbourne. So far as a public space, it's a barren wasteland and any offerings such as Apple, or any other will do a great deal to improve the area.
Score: 4 Votes (Like | Disagree)
Read All Comments