Apple is planning to open a new flagship retail location in Melbourne, Australia, at Federation Square, a shopping center, public square, and mixed-use space located in the heart of the city.

The Federation Square website says the new location will be an "Apple Global Flagship Store" that will open up in 2020. It will be Apple's most significant store in the Southern Hemisphere, with workshops, classes, and live music events. 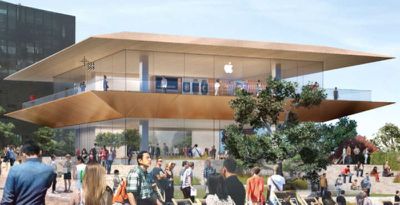 Apple's Melbourne store will create 500 square meters of new public space, connecting Federation Square with the Yarra River and Birrarung Marr. Apple will construct a new building to replace an existing Yarra building, and based on renderings shared by Federation Square, the store will have multiple levels with glass walls and a viewing deck that overlooks the Yarra River.

Apple retail chief Angela Ahrendts told The Australian that the store will feature a "bespoke design concept" and "extensive landscaping."

"Apple Federation Square respects the original vision for the plaza, with a bespoke design concept and extensive landscaping bringing increased opportunities for the community to enjoy this renowned cultural hub."

"We're thrilled to move forward in the planning process for our new home in Melbourne's Federation Square and would be honoured to call the world-class galleries and museums of Melbourne our neighbours," Ms Ahrendts said.

Construction on the new store, which will "enhance Federation Square's world renowned architecture," will start in mid-2019.

Pffft Melbourne. Always trying to one up SYDNEY

Ugh rather shoot myself than that store/public area. It looks overcrowded and too hot.

Unfortunately this will be replacing the Yarra Building which houses the Koorie Heritage Trust - a building that promotes and exhibits Aboriginal culture of South-Eastern Australia. I'm a Apple fan, but this sucks.

They had already outgrown the space and were already moving to a larger and more accessible space in the Alfred Deakin building within the square.
Score: 5 Votes (Like | Disagree)

MyMac across the street will have some serious thinking to do. At least they 2 years notice...

They will just relocate! I think Apple paid very well for the building!
[doublepost=1513784063][/doublepost]

Because theres people there. And its a store that will add to the landscaping

The new Apple store adds nothing to Federation Square in Melbourne. In fact, many would argue, this Apple store would completely degrade the area entirely.

The Yarra Building at Federation Square houses the Koorie Heritage Trust which provides a unique range of programs and services to promote, support and celebrate the indigenous Aboriginal culture of South-Eastern Australia.

The location is completely wrong. It's a public cultural space, not a commercial multinational retail space. Whether or not Apple payed for it is irrelevant. In fact, Apple won't disclose the arrangement of the transaction.

Apple can not just come along and demolish a publicly funded building in a public area. There has ben ZERO consolation according to the reports.

Its seems the people there are ready to fight this and stop the current building being demolished and stop Apple constructing the new building in that area.
[doublepost=1513785708][/doublepost]

Melbourne is what Sydney used to be.

I've visited both cities and both are actually equally really nice in their own unique way, they are quite different in my opinion. I know the Federation Square area well, and an Apple store there would really rubbish the area completely. The space is not retail or corporate, it's a public community space. Someone at Apple has not done due diligence on the area when planning this.
Score: 4 Votes (Like | Disagree)

Pffft Melbourne. Always trying to one up SYDNEY

Not at all. But by all means, keep telling yourself that ;)
Score: 4 Votes (Like | Disagree)

sparkie7
Great, means I don't have to travel all the way to chaddy or Doncaster to check out the latest apple bling
Score: 4 Votes (Like | Disagree)
Read All Comments