AT&T is again raising the price for grandfathered unlimited smartphone data plans by $5 per month, according to a support article on the carrier's website and multiple tipsters who emailed us today. The price hike will be effective this July, and notifications appear to have started hitting the first wave of grandfathered unlimited plan users over the past few days.

In the article, AT&T says that any customer who has a grandfathered $40 data plan will soon begin seeing an email about the $5 per month price increase. Multiple tipsters have already gotten such notifications, and one -- MacRumors forum user jav6454 -- says that his grandfathered unlimited data plan was originally bought for $30 around the time of the iPhone 3G. 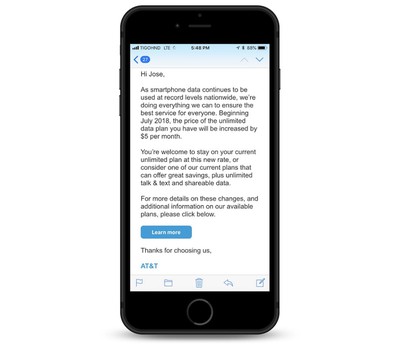 The last time a $5/month increase happened was in March 2017, raising grandfathered plans from $35 to $40, and followed an increase from $30 to $35 in February 2016. AT&T originally discontinued unlimited plans in 2010 and didn't introduce new unlimited plans again until 2017.

In its explanation, AT&T says that "record levels" of mobile data use have led to the decision to increase the monthly cost of legacy data plans:

Consumers are using mobile data at record levels and the trend is expected to continue. To help make sure we continue to provide the best service for all of our customers, a small price increase is being made at this time.

Customers who have a grandfathered $40 data plan will receive notifications of a $5 per month rate increase for the data plan. The rate increase will take effect starting with the customer’s July, 2018 service.

The carrier promises that the price increase will not impact data speeds, and speeds will only be reduced when 22GB of data in a billing cycle is exceeded or when users are in a congested area. AT&T also points out that customers can change their plan at any time, although anyone who switches out of a grandfathered plan should be warned because they won't be able to go back once a new plan is selected.

Before these new unlimited plans launched, AT&T and many other carriers were heavily focused on eliminating grandfathered users through ongoing price hikes, like we are seeing again this summer.

(Thanks Jose and Alan!)

Monday July 13, 2020 6:50 am PDT by Joe Rossignol
Earlier this year, Apple agreed to settle a U.S. class action lawsuit that accused the company of "secretly throttling" older iPhone models. Now, eligible iPhone owners are beginning to be notified about their legal rights and options. Under the proposed settlement, Apple will provide a cash payment of approximately $25 to each eligible iPhone owner who submits a claim, with its total payout ...
Read Full Article • 119 comments

Monday July 13, 2020 9:31 am PDT by Juli Clover
Apple today shared a funny video focused on the problems that people working from home have to deal with, including noisy children, chaotic schedules, communication issues, and more. The video focuses on showing off Apple products and their capabilities that can be useful when working from home, such as the ability to scan a document with an iPhone, mark up a PDF, Siri Reminders, and more.The...
Read Full Article • 73 comments