Facebook today announced that it will remove its "Trending" section from the web and all mobile devices starting next week, in an effort to "make way for future news experiences." Facebook says that its users have found Trending "less and less useful," leading to the closure of the section, which stacks the latest news articles from the day into various categories. 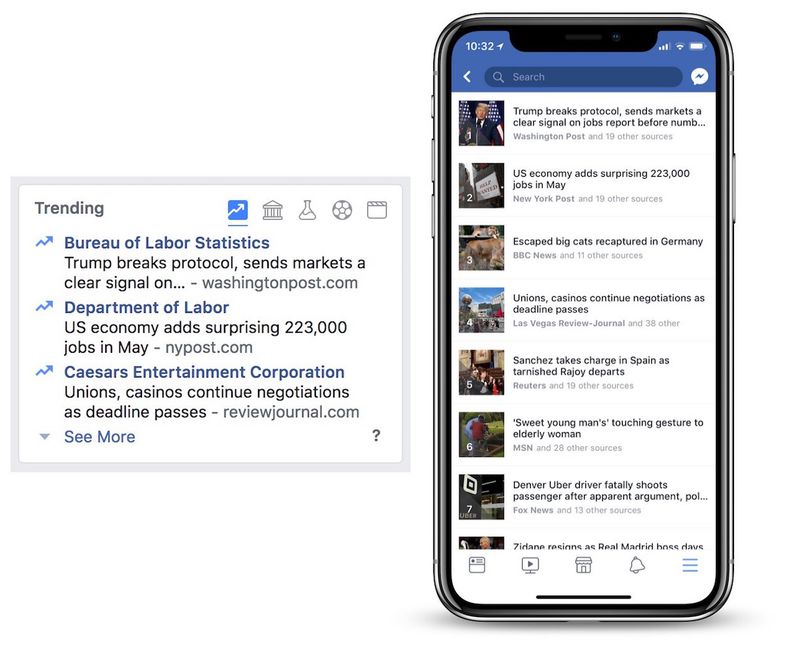 On the web, Trending is found on the right toolbar, but in iOS it's a bit more buried in the More tab > Explore > Trending News. Facebook launched the section in 2014, but it's since only been available in five countries and accounts for "less than 1.5 percent of clicks to news publishers on average." The removal of Trending will also mark the elimination of products and third-party partner integrations that rely on Trends API.

We’ve seen that the way people consume news on Facebook is changing to be primarily on mobile and increasingly through news video. So we’re exploring new ways to help people stay informed about timely, breaking news that matters to them, while making sure the news they see on Facebook is from trustworthy and quality sources.

In its place, the social media company outlined three ways it will keep users in the know about breaking news. One is a "Breaking News Label," which is a simple indicator publishers can place on their posts in a user's News Feed, as well as breaking news notifications. There is also a test for a new "Today In" section to connect users to important news from local publishers in their own cities.

Lastly, there will be new videos to view in Facebook Watch thanks to a dedicated section in the United States where users can check out exclusive live coverage, daily news briefings, and weekly deep dives. Facebook has long been attempting to expand its video presence within the mobile Facebook apps, debuting Watch last August for its exclusive video and TV content.

johnyslats
I’ll place my trust in Twitter for that sort of information, thank you very much. #DeleteFacebook
Rating: 4 Votes

So, we're taking our marble and goin' home.
Rating: 3 Votes

I’ll place my trust in Twitter for that sort of information, thank you very much. #DeleteFacebook

harrisondavies
Just this week I deleted my account and felt a weight lift from my shoulders. No more waking up and instantly checking an increasingly purile source of drivel. Good riddance.
Rating: 2 Votes

macduke
Everything they do is useless. I dream of a day when they’re gone.
Rating: 2 Votes

Candlelight
The words “trending” and “news” shouldn’t be in the same sentence. News is news. It shouldn’t be ranked based on popularity.
Rating: 2 Votes

I think the real problem here is people not wanting to read. If you read Facebook's full announcement, they are removing this in order to replace it with news videos.


I agree, Facebook already has 40% of the video ad business (Youtube has 30%) and they want to capture more. I can see the day when everything on Facebook is autoplaying videos, no longer have to waste brain power reading.
Rating: 1 Votes

Not referring to Twitter 'moments' here, just the genuine trends. I can then make my own mind up which tweets are from reputable sources

I don’t disagree in principle. But it’s always concerned me that they can still pick winners and losers as to what things appear more prominently or at all in anyone’s feed, even just in a small way and no one would be able to know that’s actually happening.
Rating: 1 Votes

So, we're taking our marble and goin' home.


Yep, somehow, one of the most popular hashtags on twitter (UK) has suddenly stopped appearing in their top trending lists, because it's politically inconvenient for them.
Rating: 1 Votes
[ Read All Comments ]